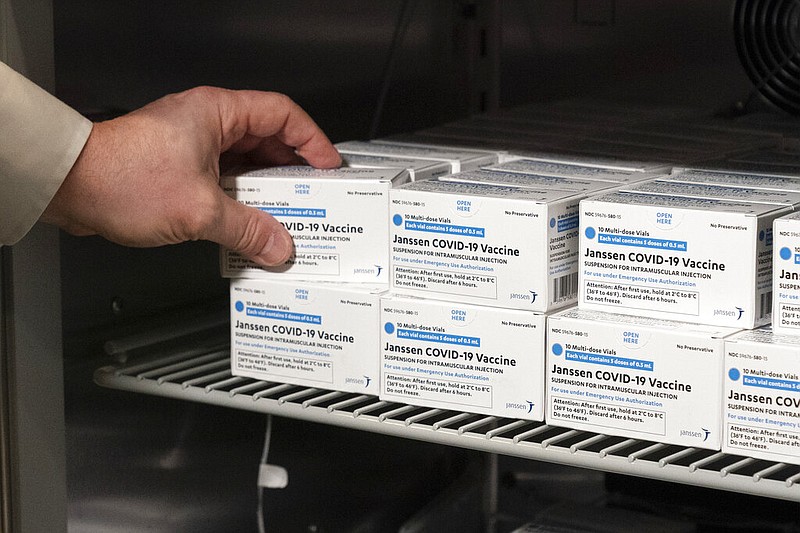 FAYETTEVILLE, Ark. – As part of the state’s effort to persuade more people to get the coronavirus vaccine, health care providers will offer the Johnson & Johnson shots to spectators at the Arkansas Travelers’ opening game Tuesday in North Little Rock, officials said Friday.

“We’re trying to break through that barrier of people that are either reluctant or just haven’t gotten around to it yet,” said David Wroten, executive vice president of the Arkansas Medical Society.

“We don’t know how many people will actually step forward and say, ‘Hey, I’m here. Let me have a vaccine,’ but we’ll find out a lot.”

The announcement was made a day after state officials said they would hold off on ordering any more vaccine from the federal government while providers work to use up their inventory.

Statewide, the pace of vaccinations continued to slow Friday, with the number of doses that had been administered, including second doses of the Pfizer and Moderna vaccines’ two-dose regimens, increasing by 16,066.

That was almost 2,400 doses fewer than the increase reported a week earlier.

Already at its lowest level since late February, the average number of doses administered each day over a rolling seven-day period fell by about 340, to less than 13,300.

Meanwhile, the state count of coronavirus cases rose Friday by 196 — a smaller increase than the one the day before and the previous Friday, April 23.

The number of people hospitalized in the state with covid-19 remained at 166.

The state death toll from the virus, as tracked by the Department of Health, rose by four, to 5,739.

“Case numbers continue to remain steady throughout the state,” Gov. Asa Hutchinson said in a statement.

“Local health units in all 75 counties have vaccine doses ready to go, and the Department of Health continues to provide mass clinics. We need Arkansans to step up and get vaccinated so we can put an end to this pandemic.”

In the order, Hyde notes that about 29% of Pulaski County residents have been fully vaccinated and “optimism is warranted; however until vaccine numbers increase, we must remain vigilant.”

The previous order was set to expire Sunday. This is the fourth time Hyde has pushed back the full opening of county offices since closing them on March 13, 2020.

In the past week, seven students tested positive for the virus, and 19 others were quarantined, the district said.

Hutchinson said Monday that the use of Johnson & Johnson’s vaccine could resume in Arkansas after a nationwide “pause” that was implemented on April 13 after some people outside Arkansas who received the shot developed a rare blood-clotting disorder.

At his weekly news conference on the pandemic Tuesday, the Republican governor mentioned Travelers games as one of the places where he’d like to see people be able to get the shots.

Wroten said the medical society approached the Health Department more than a month ago about having physicians more involved in the state’s vaccination efforts, including holding community vaccination clinics.

Then, “sometime over the last week or two, the Health Department staff had a brainstorming session and came up with the idea that doing something at a Travelers game might be a really good way to go,” he said.

He said physicians with the society will be at the clinic to help administer the shots and answer questions.

“People that are hesitant about taking the vaccine, I think having the doctors there to help talk to them about those things will be very helpful,” Wroten said.

Although Health Secretary Jose Romero said Tuesday that the department would offer an alternative, such as the Moderna vaccine, at clinics where it offers Johnson & Johnson vaccine, department spokeswoman Danyelle McNeill said that won’t be the case at the Travelers game.

“We’ll have J&J at this first event,” McNeill said in an email.

“We may not always have the alternative on-site. If another type of vaccine is requested, we’ll help direct them to another location.”

Wroten said people who get the shots at the game will be monitored for 15 minutes for any allergic reactions.

State Epidemiologist Jennifer Dillaha said common side effects, such as soreness in the arm or fever, usually don’t kick in until a day or two after the injection, so people shouldn’t worry that they’ll experience them during the game.

Such side effects usually go away in about a day, she said.

“Some people, just because they got a shot, will feel queasy afterward, but it’s not related to the vaccine,” she said “It’s just the fact that they got an injection.”

Yavonda Chase, a spokeswoman for the University of Arkansas for Medical Sciences, said the university has been prioritizing its supply of Johnson & Johnson for “populations where it would be burdensome for people to have to come back for a second dose.”

For instance, she said UAMS offers the vaccine twice a week to patients at the Pulaski County Regional Crisis Stabilization Unit, which UAMS staffs.

All patients who are vaccinated must “actively consent,” she said.

“We make sure that no one is in the middle of a mental health crisis who is vaccinated,” Chase said.

She said UAMS has been giving an average of 200 Pfizer doses, including second doses, a day at its clinic on 12th Street in Little Rock and about 100 a day at its Northwest Arkansas campus.

It’s also been giving about 20 a day at a walk-in clinic it started April 6 for patients at UAMS Medical Center.

“We kind of have it advertised all over campus to make it easy on patients and visitors who are here to just see that sign and say, ‘Oh, I’m going to get my vaccine right now,'” Chase said.

UAMS is also providing the Pfizer shots at its clinic scheduled from 8 a.m. to 4 p.m. today at Simmons Bank Arena in North Little Rock.

The clinic, which is open to walk-ins, is the second of four scheduled at the arena.

As the number of people wanting vaccines has dwindled, pharmacists have reported having more difficulty finding enough people to use all of the doses in each vial of vaccine.

Health Department figures show that from April 14-27, the number of vaccine doses that were wasted after being left unused in a vial or syringe increased by just over 2,000 to 4,456.

“I’m thinking that will likely go up because we don’t want to miss opportunities to vaccinate people for fear that we may not be able to use all the doses,” Dillaha said.

Of the 718,685 Arkansas who had been fully immunized as of Wednesday, 464, or fewer than 1 in 1,000, had developed “breakthrough” infections, meaning they became ill with covid-19 at least two weeks after being fully vaccinated, according to the Health Department.

Eleven of those people were hospitalized with covid-19, and two died.

Dillaha said the figures show that the vaccines are “extremely effective — more so than we could have hoped for.”

According to the U.S. Centers for Disease Control and Prevention, the number of Arkansans who had received at least one vaccine dose rose Friday by 4,241, to 1,071,773, representing about 35.5% of the state’s population.

(The CDC includes doses administered by federal entities such as the Department of Veterans Affairs, the military and the Bureau of Prisons. The CDC’s figures also include Arkansans who were vaccinated in other states except Texas, which reports only aggregate information to the federal agency.)

Nationally, 43.6% of people had received at least one dose and 30.5% were fully vaccinated.

After falling earlier in the week, the number of active cases among public school district students and employees, as tracked in Health Department reports, rose Thursday to 341, the highest level since before spring break.

Among colleges and universities, the number of active cases rose by 10, to 85, between Monday and Thursday.

The University of Arkansas, Fayetteville was listed as having the largest number on both days, but it fell from 16, to 12.

Harding University in Searcy and Philander Smith College in Little Rock were tied in Thursday’s report for the second-highest total, 11.

Friday’s statewide increase in cases was smaller by 44 than the one Thursday and by 40 than the rise a week earlier.

The average number of cases added to the state’s tallies over a rolling seven-day period fell Friday by about six, to 181.

For the past two weeks, the average has fluctuated between about 180 and 200 after rising from this year’s low of 151 during the week ending April 2.

By drawing people outside, where the chance of transmission is lower, Dillaha said warm weather has helped keep down the virus’ spread.

Vaccinations, especially among health care workers and in nursing homes and other long-term care settings, have also helped, she said.

“Then I think there’s still enough people taking precautions that they are also playing a part in reducing the spread in Arkansas,” Dillaha said.

“And then of course, we have a lot of people, adolescents and children, who cannot be vaccinated yet, and they are working to carry on with their lives with school, sports or other activities, and they are potentially at risk as they engage with their activities,” she said.

She said the risk of serious complications from taking one of the vaccines is “very, very low, but the risk of having long-term side effects or consequences from having covid-19 is hundreds of times higher.”

“I do hope that over time people will gain confidence in the [coronavirus] vaccine and choose to be vaccinated,” she said. “We’re not giving up yet.”

Dillaha said only two of the deaths reported Friday happened within the past month. Of the others, one occurred in mid-March, and the other was in November.

“That happens on occasion if they have an autopsy or something pending — it can be pretty delayed sometimes,” she said.

The number of the state’s virus patients who were on ventilators fell Friday by one, to 28.

The cases that were added to the state’s tallies included 149 that were confirmed through polymerase chain reaction, or PCR, tests.

The other 47 were “probable” cases, which include those identified through less-sensitive antigen tests.

The number of cases that were considered active rose by five, to 1,966, as new cases outpaced recoveries.

Pulaski County had the most new cases, 28, followed by Washington County with 27, and Craighead County with 18.

Neither the Health Department nor the Department of Corrections reported any new cases among prison and jail inmates.

The state’s death toll rose by four, to 4,559, among confirmed cases and remained at 1,180 among probable cases.

Among nursing home and assisted-living facility residents, the state’s count of virus deaths remained at 2,074.

The number of people who have ever been hospitalized in the state with covid-19 grew by 10 to 15,855.

The number of the state’s virus patients who have ever been on a ventilator with covid-19 remained at 1,619.

Information for this article was contributed by John Lynch and Cynthia Howell of the Arkansas Democrat-Gazette.

Active covid cases in state rise back above 2,000