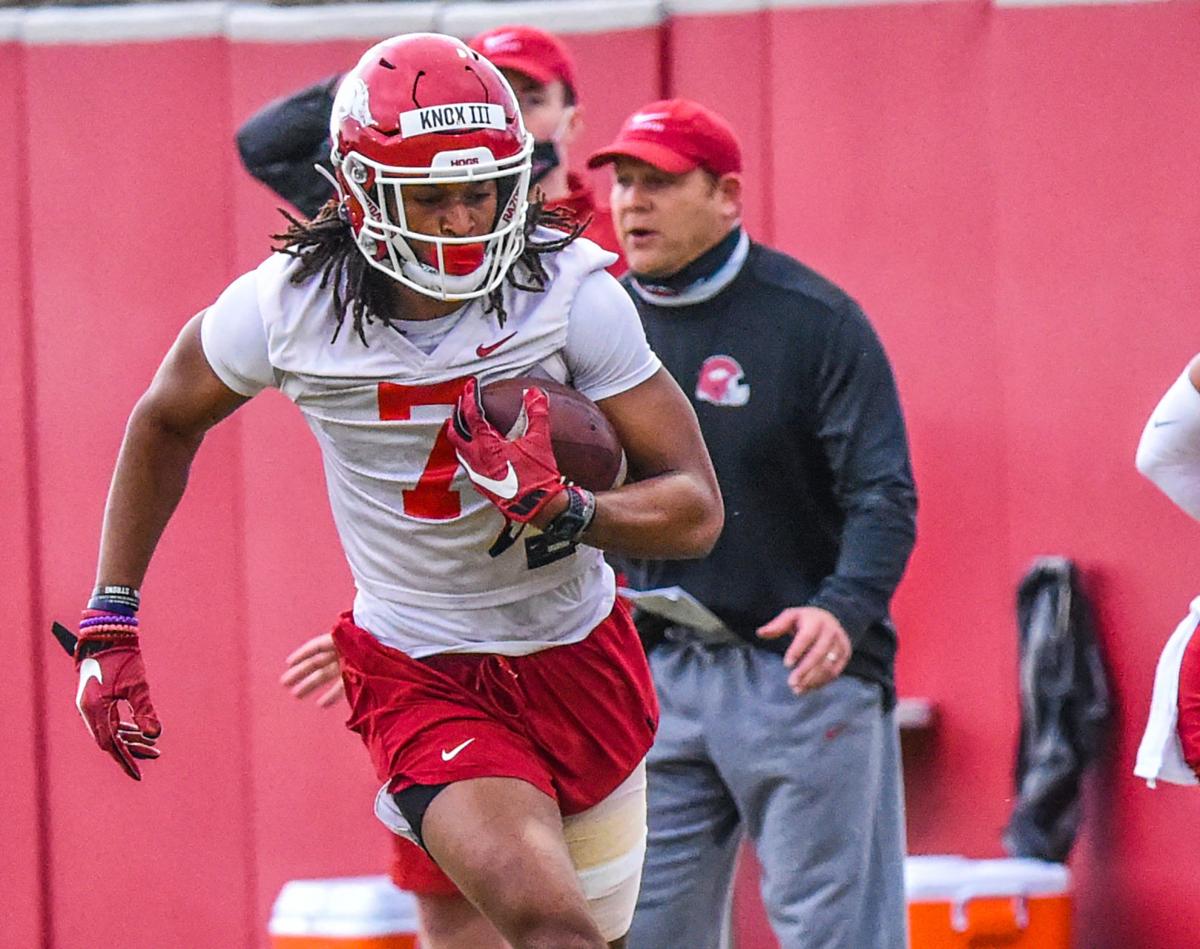 FAYETTEVILLE, Ark. — Call it the School of Hard Knox.

For upon arriving in January, 2019 as a December high school graduate drawing so spring practice reviews so rave to be an Arkansas highlight in all the preseason publications, Trey Knox last year wasn’t a blip on the Razorbacks radar.

The 6-5 freshman wasn’t All-World in that 2019 fall like his spring but he still stood out out with 28 catches for 385 yards and three touchdowns on a 2-10 overall/0-8 in the SEC bad Razorbacks team.

Against an entirely SEC schedule the 2020 Razorbacks went 3-7 that should have been 4-6.

An officiating blunder allowed Auburn to keep a fumble lost and kick a game-winning field goal.

Yet Knox was nearly negligible, 7 catches for 70 yards, no touchdowns and some wincing drops.

Just too much too soon two springs ago raising expectations too high?

“That’s a good question,” Knox replied as he and safety Simeon Blair were made media available after Thursday’s practice. “I would say yes, just high expectations. But honestly I hold myself to a higher standard. My freshman year was a good year, but we’re just trying to expand upon that. I’d like to try to meet those expectations because I know I can. I’m going to push myself every day to do it.”

Reviewing 2020, Knox figures for him it started off track with a new head coach and new offensive coordinator but no spring drills entirely cancelled by the covid-19 pandemic. Then he got sick as the summer preseason again and just never clicked.

“I don’t want to make excuses but I think just not having a spring really hurt me,” Knox of Murfreesboro, Tenn. said. “I need repetition, repetition. Because I want to know exactly what I’m doing play in and play out. I think not having that spring and then being not 100 percent at the beginning of fall camp really put me a step behind everyone else.”

He knew that Pittman and offensive coordinator Kendal Briles took note. They’re going to play those they see producing.

“I think I just didn’t get off on the right foot with the coaching staff and not playing fast and going out there and thinking,” Knox said. “I think those are the things that I think really held me back last year.”

With the transfer portal jammed fuller than New York traffic at Friday rush hour, Knox easily could have filed for a change of 2021 scenery.

Obviously he didn’t though surely in these portal popular times he must have thought about it.

“I feel like that goes through a lot of people’s minds,” Knox said. “It obviously did. But I love it here in Fayetteville. I love the staff. I love my teammates. I really care about how my teammates view me and so I want to be here, I want to help this program go back to the top, be at the top. I feel like it’s best to just stick it out.”

Knox said he’s not only sticking it out but showing out gaining good offseason weight after last summer’s illness cost him 10 pounds as the 2020 preseason drills began.

“I’ve been focused on getting faster and putting on weight,” Knox said. “I’ve already gained eight pounds. Just trying to better myself, keep my head down and work because I’ve got faith in myself, the coaches have faith in me. I think we’re going to be all right.”

Blair, the fourth-year junior from Pine Bluff, said he’s practicing against a different Knox than who he practiced against last fall.

“ He’s worked his butt off,” Blair said. “He’s got better at running routes, just trying to take his entire game to the next level. We did some 1-on-1 drills before the spring even started, giving each other pointers on, like, what a DB is looking for with a receiver, and what the receiver looks for in a DB. I’ve seen him use that on the field in his route running, in his speed and everything he’s done.”

Knox avidly praises Blair, gone from walk-on to a 2-year letterman running among three first-team safeties in 3-2-6 defense this spring.

“Oh Simeon is a great player,” Knox said. “He will not hesitate to hit you. The boy’s smart. I mean he’s calling out plays just off of our alignment that we run and they’re jumping routes and they’re over there making plays.”

Blair’s willingness to hit hit it off for him to earn a scholarship.

“I’ve always played like that,” Blair said. “There’s only one way you can play defense. You’ve got to play defense violent and fast, so I just try to keep that in my mind every play. Even if we’re in practice. I try to be in game mode.”

The Razorbacks have an entirely closed to media practice Saturday and will practice twice next week before completing spring drills with the April 17 Red-White spring game at Reynolds Razorback Stadium.