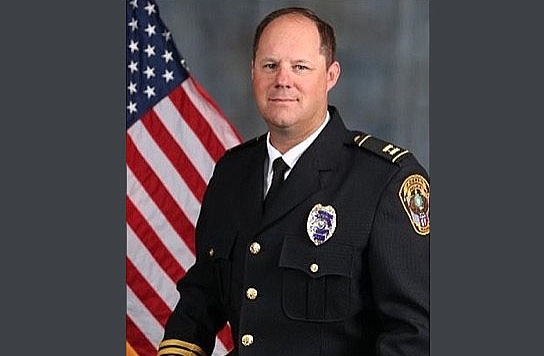 ROGERS, AR—The City of Rogers has a new Chief of Police. Mayor Greg Hines has promoted Captain Jonathan Best to be the permanent Chief of Police of the Rogers Police Department.

Captain Best has been on the force since May 1997, working as patrol officer, the crime suppression unit and narcotic investigations.

In 2015, he was promoted to Captain and oversaw criminal investigations, training, evidence, hiring and recruiting, and uniformed division.

The City of Rogers said that the Best went through every rank at Rogers PD, has graduated at FBI National Academy, and was selected for numerous special assignments.

Most recently, he was serving as interim Chief during the nation-wide search to fill the Chief of Police vacancy.

“I like where the department is at now. I think it is headed in the right direction. We are on the right path. The culture that has been developed here is what is needed, and we have unbelievable community support,” said Chief Best.

Mayor Hines is delighted that he named Best as Chief of Police.

“Chief Best brings a wealth of experience to this role. His multiple promotions at Rogers Police Department show his dedication to growth and hard work. He knows the department and the city of Rogers well, and I am excited to see him take the lead as Chief of Police,” said Mayor Greg Hines.

Chief Best is the 33rd Chief of Police in the department’s history.

Dump truck overturns on Wedington Drive and shuts down the street

Rogers fire dept. identified the victim of I-49 accident