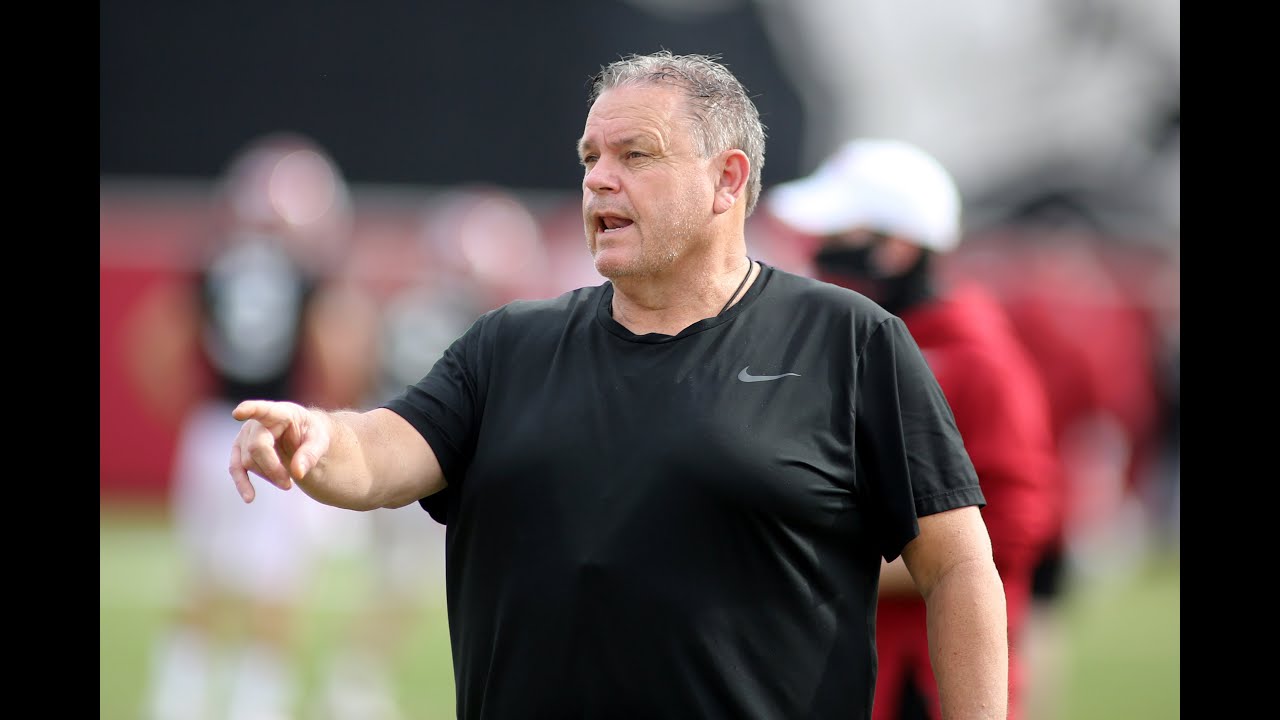 FAYETTEVILLE, Ark. — On a sun-splashed first day of spring, the Arkansas Razorbacks went through a physical scrimmage of 120 or so plays before a crowd of 3,000 or so fans at Reynolds Razorback Stadium.

The first open scrimmage of the Coach Sam Pittman era featured a handful of big plays on both sides of the ball, special deliveries by offensive standouts Trelon Smith and Treylon Burks, a few more penalties than Pittman might have liked and no major injuries.

“I think we saw enough good on both sides of the ball to be encouraged,” Pittman said.

Top quarterbacks KJ Jefferson and Malik Hornsby were up and down, just like the first couple of units on defense, and held onto the ball longer than necessary in general, leading to a few sacks.

“There was some good and bad, I think, on both sides,” Pittman said. “It wasn’t a scrimmage that was dominated by one side. And to be honest with you, as a head coach that’s a scrimmage you like.”

Smith showed exactly what he delivered last season while rising into a lead role at tailback: Speed, enthusiasm and toughness between the tackles. The junior ran nine times for 82 yards in unofficial stats, including a 1-yard touchdown run in red zone work against the top defense after which he high-stepped in celebration.

Smith had a 15-yard run on the first play of the scrimmage and amassed 29 yards on three runs to open the day.

Jefferson connected with Burks on a 31-yard pass to set up Matthew Phillips’ 25-yard field goal on the first possession. Later, on a drive started by Hornsby at the 50-yard line, Jefferson rolled right and found Burks crossing at the back of the end zone for a 20-yard touchdown.

“Isn’t it amazing how guys who have played before play pretty good in the spring?” Pittman said when asked about Burks and Smith.

“Burks is a talented, talented kid. Everybody knows that. He went up and got one in the end zone. … And then Smitty, he’s got one gear and it’s full throttle. That’s what makes him a good football player. He’s a physical kid. Not big, but he plays more physical and heavier than what he is.”

Jefferson also found tight end Blake Kern for an 18-yard touchdown against a blown coverage on the first play of a red zone period.

Hornsby had a chance to lead the second-team offense to a touchdown in his red zone series, but he threw behind an open Kendall Catalon at the goal line on third and 6.

The defense provided a number of impact plays, including takeaways early and late.

Safety Malik Chavis jumped high to intercept a deep pass from Jefferson intended for Tyson Morris on the second snap of the second series. In a two-minute drill on the final play of the scrimmage, Hornsby threw low on a swing pass to Dominique Johnson, but the throw was behind the line of scrimmage for a lateral and defensive back Nathan Parodi raced in and recovered it to end the series and the afternoon.

Johnson, who scored two touchdowns, stayed down on the field for a minute after converting a third-and-1 play with a 2-yard run in the red zone. He was checked by medical trainers and came off under his own power. He returned to the scrimmage and later scored his second touchdown.

Additionally, defensive back Nick Turner ripped the ball from from Darin Turner after a 14-yard reception from John Stephen Jones and Jayden Johnson recovered.

The defense provided at least seven touch “sacks,” and five or more of them would have likely been real sacks if contact was allowed on the quarterbacks. End Dorian Gerald accounted for two of them, while Bumper Pool, Myles Slusher, Grant Morgan, Jaccorei Turner and Jayden Johnson had one each.

“You know in the spring, a lot of times the quarterback doesn’t have an opportunity to get away from a touch,” Pittman said. “There was at least five of them [where] there was no way he could get out of there. I thought at least early today — and I’ll have to watch the tape — but I thought at least early, the sacks we were taking were the quarterback’s fault. I thought that we could have gotten rid of the ball. We were out of the pocket on a couple of them that if we just throw the ball past the line of scrimmage, we’re in good shape.”

Early enrollee Raheim “Rocket” Sanders made his presence known with a couple of long runs and breaking some tackles. Playing a new position and running mostly with the third-team offense, Sanders had six carries for 56 yards in unofficial stat-keeping, including the scrimmage’s longest run on a 35-yard gain.

The second-team offense had a strong start with Hornsby at the helm against the defensive starters. Hornsby had a 19-yard connection to tight end Hudson Henry and a 20-yard scramble over the left edge to get the unit on the move, then he found John David White for a 37-yard reception against nickel back Greg Brooks Jr. to reach the 1. Johnson powered over for a touchdown on the next play.

“I thought they started out slow, and then they picked it up,” Pittman said of the defense. “But overall, they came back. I think in the red area they blew a coverage and the offense scored on them. And then the first and goal from the 4, the offense was able to run the ball in in two snaps on the ones. Honestly, I wanted to see that. I wanted to see if we could stop them. I did not want Kendal [Briles] to throw the football down there. I wanted to see if we could stop the run and can we run the football?”

The low red zone score in two plays came on two Smith runs: a 3-yard gain in which he leaped high over the pile and nearly found the goal plane, followed by his 1-yard score.

White had a productive day. The 5-11 sophomore set up Johnson’s first touchdown with an athletic catch against Brooks. Then later he caught a slant pass from Lucas Coley for an 11-yard score with Parodi in coverage.

The kicking game was a mixed bag, with a couple of kickoffs going out of bounds and the field-goal units missing more kicks than they made.

Slusher moved up with the first-team defense at safety in place of Catalon and had what looked to be a solid day. He took a kickoff at the goal line and broke through the initial wave of defenders for what set up to be a 100-yard touchdown return before it was blown dead. The kickoff and punt returns were held at full speed but without tackling to the ground.