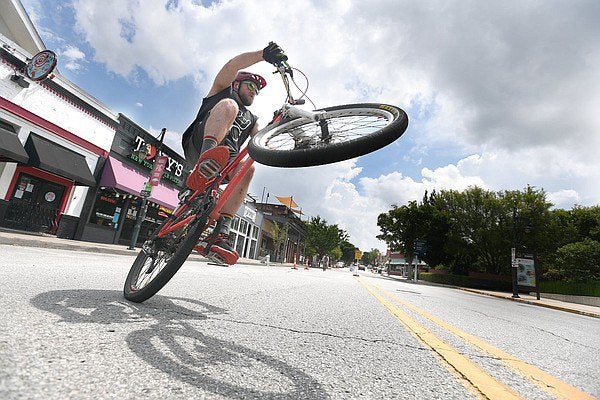 FAYETTEVILLE, Ark. — The city wants suggestions on expanding a program intended to slow car traffic and provide pedestrians safe opportunities to be outside during the pandemic.

Fayetteville, Rogers and Bentonville last year participated in nonprofit BikeNWA’s slow streets program. The program involves setting up signs on streets informing drivers to go extra slow through certain stretches. The signs discourage cars without a destination on the street from passing through. Pedestrians, bicyclists and children are encouraged to use the streets for travel and recreation.

The program took effect on a variety of days and times during summer and fall.

Fayetteville’s Transportation Committee, consisting of four City Council members, on Jan. 26 looked at possible areas to implement the program this year. Each of the four wards of the city has two options.

The target date to start the new programs is May, said Dane Eifling, the city’s mobility coordinator. He and BikeNWA members want to give neighborhoods plenty of notice and opportunity for public input, he said.

“It felt like that kind of compromise model, where it was Goldilocks,” Eifling said. “Not too long, not too short, not too big, not too small.”

This year, the program likely will focus on residential streets and happen on weekends, Eifling said.

Bringing back the Washington Avenue and Betty Jo Drive programs are among this year’s options.

Another option in the south part of the city is Mitchell Street, near Ramay Junior High. A second option for the west side of town is Rupple to Salem roads near Holcomb Elementary.

The Washington-Willow Historic District east of College Avenue and Oakland Avenue from Sycamore to Hazel streets near the center of town could be included. At the northeast part of town, Villa Boulevard from Sunbridge Drive to Appleby Road is being considered. Additionally, a loop with Loxley and Elizabeth avenues could have slow streets north and south of Rolling Hills Drive.

Transportation Committee members voiced some preferences, but nothing is set, Eifling said. Four of the eight options will be selected, but other neighborhoods can ask to be included, he said.

“We would love to hear from people. We call them neighborhood champions — people who just are willing to engage with it,” Eifling said.

Eifling said he and BikeNWA should decide the locations in a month or two.

Residents provided mixed feedback on last year’s program. A city survey of about 280 online participants showed about half supported the program, while half opposed it. Those in support tended to be people who lived in the neighborhoods, while those against tended to criticize the impediment to car traffic.

Eifling said he felt some of the negative feedback had to do with the rollout. For instance, signs on Dickson Street initially said no through traffic, making drivers think they couldn’t bring their cars past the signs and park on the street, he said. Signs at Wilson Park said park and local traffic only, giving the impression the streets were some kind of private drive, he said.

The signs were changed early on to make it clear cars could still pass through the streets slowly, Eifling said. The city ramped up its marketing efforts online to explain how the program works, so fewer residents would be caught off-guard when they came across a sign, he said.

The program could prove to be an effective tool to reduce speeds in neighborhoods, Eifling said.

“There’s no silver bullet,” he said. “I think enforcement has its role to play, but there are lots of other factors to make streets safe.”

Penny Flatte, a retired real estate agent who lives near the Fayetteville Municipal Airport, said she drove through the Washington Avenue program several times when it happened. She said she felt it gave the sense of a private drive through an affluent neighborhood, rather than an open, public street.

Flatte said she understood the purpose of trying to slow cars in neighborhoods. However, that traffic has to go somewhere, and the result likely puts cars on other streets in neighborhoods that aren’t as used to it, she said.

“To me, that is a real danger,” Flatte said. “Adults might grumble about it, but it’s the kids you worry about. Like if a ball goes out to the street, there just might be more for them to observe than they’re used to.”

Across the region, slowly

Several cities across the nation started implementing slow streets programs in spring, when the pandemic put much car traffic to a halt, according to the National Association of City Transportation Officials. The idea was to take advantage of lower car volumes and relieve pedestrian and bicycle traffic on trails, which have seen an uptick in activity.

Springdale didn’t have a slow streets program last year. Anything like that would go through the city’s Traffic Committee, which makes recommendations to the administration, said Brad Baldwin, director of the city’s Engineering and Public Works departments. A proposal hasn’t been submitted, he said.

“We’re open to it; we just haven’t tackled that yet,” Baldwin said.

Rogers’ slow streets program covered areas of downtown, including Oak, Seventh and Cypress streets, and streets near the Rogers Historical Museum. Hours were 7 p.m. Friday to 7 p.m. Sunday from Sept. 4 to Nov. 1.

Kara King, the city’s trails coordinator, said the city is exploring some new areas. Residential areas with links to the existing trail system especially are important, she said.

“It may be a lot of residential, but it may be areas that have schools, residential and business, kind of a mix of all,” King said. “And it also just depends on the logistics of the street we’re looking at.”

Bentonville had a slow streets route running through downtown, roughly from Northeast Third Street to Southeast Fifth Street. It happened 9 a.m. Saturday to 7 p.m. Sunday during the summer and fall.

The city wants to bring the same program back this year. The benefit was evident in the way pedestrians and bicyclists interacted along landmarks such as the Benton County Courthouse, Compton Gardens, the Momentary and Razorback Greenway, said David Wright, the city’s parks director. The program also helped draw bodies to the doors of businesses struggling during the pandemic, he said.

However, there are a couple major residential projects happening along the route this year, so adjustments might be necessary, Wright said.

Like Fayetteville, the city got a little pushback from residents when the program first started, Wright said. As it went on, however, people started to realize cars could still go through, and restaurants started setting up seating areas outside, he said.

“Here’s the bottom line: We saw value in slow streets last year. People enjoyed it from a recreation standpoint, from a getting-out-of-the-house standpoint, from a physical fitness and also a mental health standpoint,” Wright said. “We want to see it continue. We just have to figure out exactly what that looks like in 2021.”

In April, Oakland, Calif., became one of the first cities in the United States to implement a slow streets program. The move was billed as a way to celebrate nonmotorized mobility but drew criticism from marginalized communities, according to an Jan. 6 article from Bloomberg.

The city’s plan to open 74 miles of streets to bicycles and pedestrians largely happened all at once, with little input from residents, according to the article. Online surveys about it were mostly filled out by white, more affluent residents.

Paxton Roberts, executive director of BikeNWA, said community buy-in is crucial to the program’s success. That’s why organizers are planning events now, months before the programs will take effect in summer, he said.

The Walton Family Foundation paid for the program last year as part of BikeNWA’s larger capacity building grant with the foundation, Roberts said. Average cost of a Slow Streets initiative is about $40,000 in each city to cover supplies, materials and signs. Funding for this year is pending, he said.

The hope is to bring slow streets to all four major cities of Northwest Arkansas, Roberts said. The programs may all look a little different based on what residents want, and that’s part of the point, he said.

Neighborhoods without adequate sidewalks are encouraged to ask their cities about the program, Roberts said. The nonprofit hopes to reach more diverse groups of residents this year, he said.

“We need people to ask for these slow street routes,” Roberts said. “We don’t want to come into a neighborhood and put Slow Streets in if they don’t want it.”