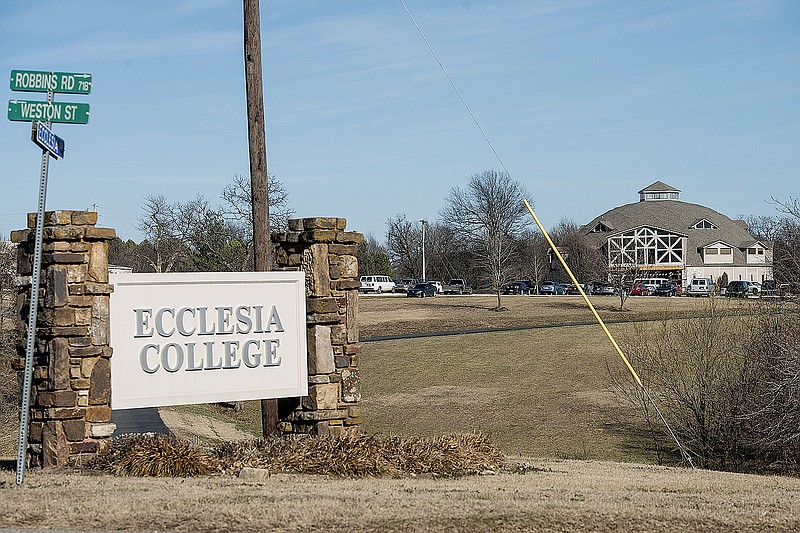 FAYETTEVILLE, Ark. — A lawsuit seeking to recoup some state grant money awarded to Ecclesia College will continue with a new lead plaintiff, a judge in Washington County ruled Monday.

The college received up to $550,000 in grants tainted by kickbacks, according to court records. The lawsuit claims the grants were an illegal exaction because of the kickbacks. It asks the money be returned to the state.

The money from the state’s General Improvement Fund to Ecclesia, requested by legislators and approved by the Northwest Arkansas Economic Development District, also wasn’t used for the stated purposes, according to the lawsuit.

Jim Parsons of Bella Vista, the original plaintiff, is being allowed to drop out of the suit he filed three years ago. Lawyers for the college argued the case should be dismissed in its entirety, as Parsons requested.

Circuit Judge John Threet granted the motion Monday as well as dismissing Parsons. Threet also granted a continuance so lawyers in the case can reassess their positions. A new date for the case has not been set.

Threet said the case is a class action in which everyone who paid state taxes in Arkansas is considered part of the group of plaintiffs. One or more members of a class are typically selected to represent all the others in court. The representative is expected to work in the best interests of everyone else in the class.

Travis Story, a Fayetteville attorney for both former Ecclesia President Oren Paris III and the college, filed a motion Sept. 11 objecting to the substitution of King because Parsons wanted the case dismissed.

“I can’t find any case, where it’s an illegal exaction, being dismissed by the main plaintiff,” Threet said during an online hearing. “The case law seems, to me, to be pretty clear that parties include everybody — everybody that is in the taxed area — whether it’s city, county, state, whatever.”

Story argued Monday that King isn’t a suitable replacement as class representative because he was a legislator when the grants were awarded. Bishop responded King, as a taxpayer in Arkansas, has been a party since the claim was filed and can serve as a class representative.

The Arkansas Constitution gives residents the right to act to protect tax dollars from being illegally obtained or spent, according to Bishop.

Parsons originally filed the suit as a state Freedom of Information Act request for documents such as financial records from the college. It was then amended to seek reimbursement to the state of the grant money. Threet is allowing Bishop to drop the FOI part of the lawsuit, as it only applied to Parsons.

Paris is serving a federal sentence for conspiracy involving the kickbacks. He was recently released from prison to home detention because of the covid-19 pandemic.

Paris pleaded guilty March 3, 2017, the week before he was to go to trial along with former state Sen. Jon Woods of Springdale and consultant Randall Shelton Jr. In the scheme, Paris hired Shelton as a consultant and paid him. Woods and then-state Rep. Micah Neal obtained grants for the college. Shelton then passed along some of the grant money to Woods and Neal, according to trial testimony and financial records.

Neal pleaded guilty, cooperated with federal investigators and testified against his co-conspirators at trial. Woods and Shelton were found guilty by the jury.

Paris’ federal criminal conviction was upheld by the 8th U.S. Circuit Court of Appeals on March 29.

The private, Christian college in Springdale spent $692,500 in state grants from 2013 through 2014 to buy land, according to the U.S. Attorney’s Office for the Western District of Arkansas. The school either bought or paid off the loans on 48.5 acres from 2013 through 2014 with the taxpayer money. Its grant applications said the land was needed to accommodate the college’s growth.

“The funds were not used for the acquisition of land for student housing, nor were they used to build student housing,” according to the lawsuit. “Instead, the funds were used to pay kickbacks to legislators, to purchase tracts of land, which defendant promptly encumbered to acquire additional funds for the personal benefit of its officers, agents and employees.”

The state Department of Finance and Administration asked Attorney General Leslie Rutledge’s office in 2018 to sue the college to reclaim at least $600,000 of the grant money.

The Attorney General’s Office declined, arguing Paris and his co-defendants were ordered by a federal judge to repay the money. Paris was ordered to pay $621,500 in restitution.

Federal restitution payment information can only be released by a defendant, his attorney or the U.S. Attorney’s Office. Acting U.S. Attorney Clay Fowlkes declined to comment on whether Paris has paid restitution. Story did not respond to a message seeing comment.

The improvement fund contained tax money left unspent at the end of the state’s two-year budget cycle. The fund also included interest earned on state accounts. After the state Supreme Court in 2006 declared the Legislature could not direct appropriations to local-level projects, lawmakers adopted the process of dispersing such funds through regional improvement districts.