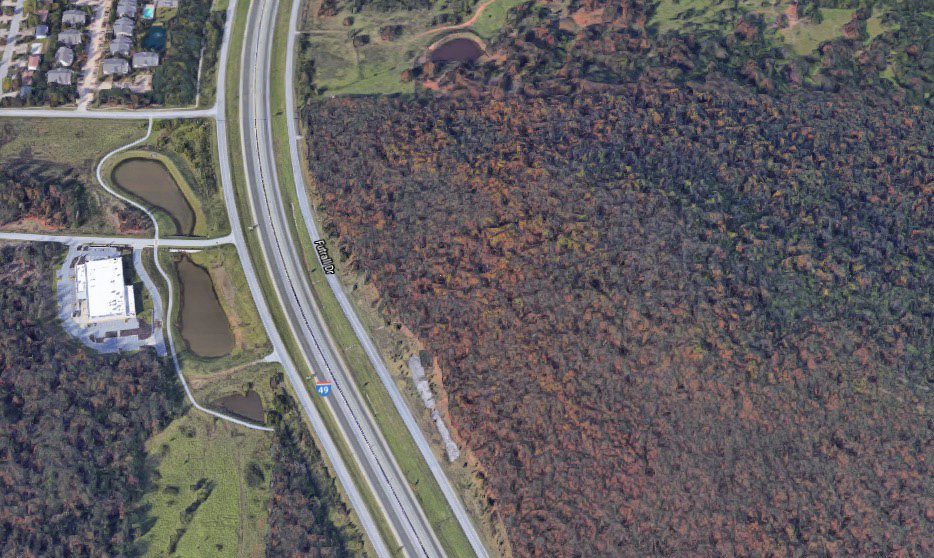 FAYETTEVILLE, Ark. – A land swap between the city and University of Arkansas has cleared the way for the preservation of over 60 acres of green space and a planned trail connection to two parks in Fayetteville.

The City Council last week unanimously approved a real estate contract to take the university’s property on the western slope of Markham Hill in exchange for city-owned land near the intersection of Razorback Road and Martin Luther King Jr. Boulevard.

The hillside property includes 62.4 wooded acres west of the university, while the city land includes roughly 10 acres along Indian Trail behind Chick-fil-A and Sonic.

Aside from preserving the tree canopy on the hill, officials hope to one day construct the Fayetteville Traverse Trail which will connect the university to Centennial Park to the west through a tunnel under Interstate 49 and also to Kessler Mountain Regional Park to the south.

The trails would help create a loop by linking to the existing Cato Springs and Town Branch trails northeast of Kessler Mountain.

The traverse would be open to bikers, runners, hikers, dog walkers, bird watchers, and students accessing natural areas for research and education, according to city documents.

During Tuesday’s meeting, Council Member Kyle Smith said he liked the idea, but asked about the university’s plans for the Indian Trail property, which also includes a significant tree canopy.

Mike Johnson, associate vice chancellor for facilities at the university, said the plan is to build a 12-court tennis complexon the north portion of the property and to construct mountain bike trails in the wooded area to the south.

Mayor Lioneld Jordan said the project has been in the works for years.

The two parties have been in agreement over the exchange since as far back as 2017, but it wasn’t until 2019 that an amendment to state law allowed municipal land to be sold without competitive bidding.

Jordan said that process was challenging, but it will prove to be worth the effort.

“It has been a grind getting this through this…but in the last six years we’ve preserved over 1,200 acres,” said Jordan, referencing in part the city’s preservation of the mountaintops where Kessler Mountain Regional Park and Centennial Park are located.

“Buildings come and go, bridges come and go and even trails come and go,” said Jordan. “But those hillsides and those trees will be there forever, for every generation that lives in this city.”