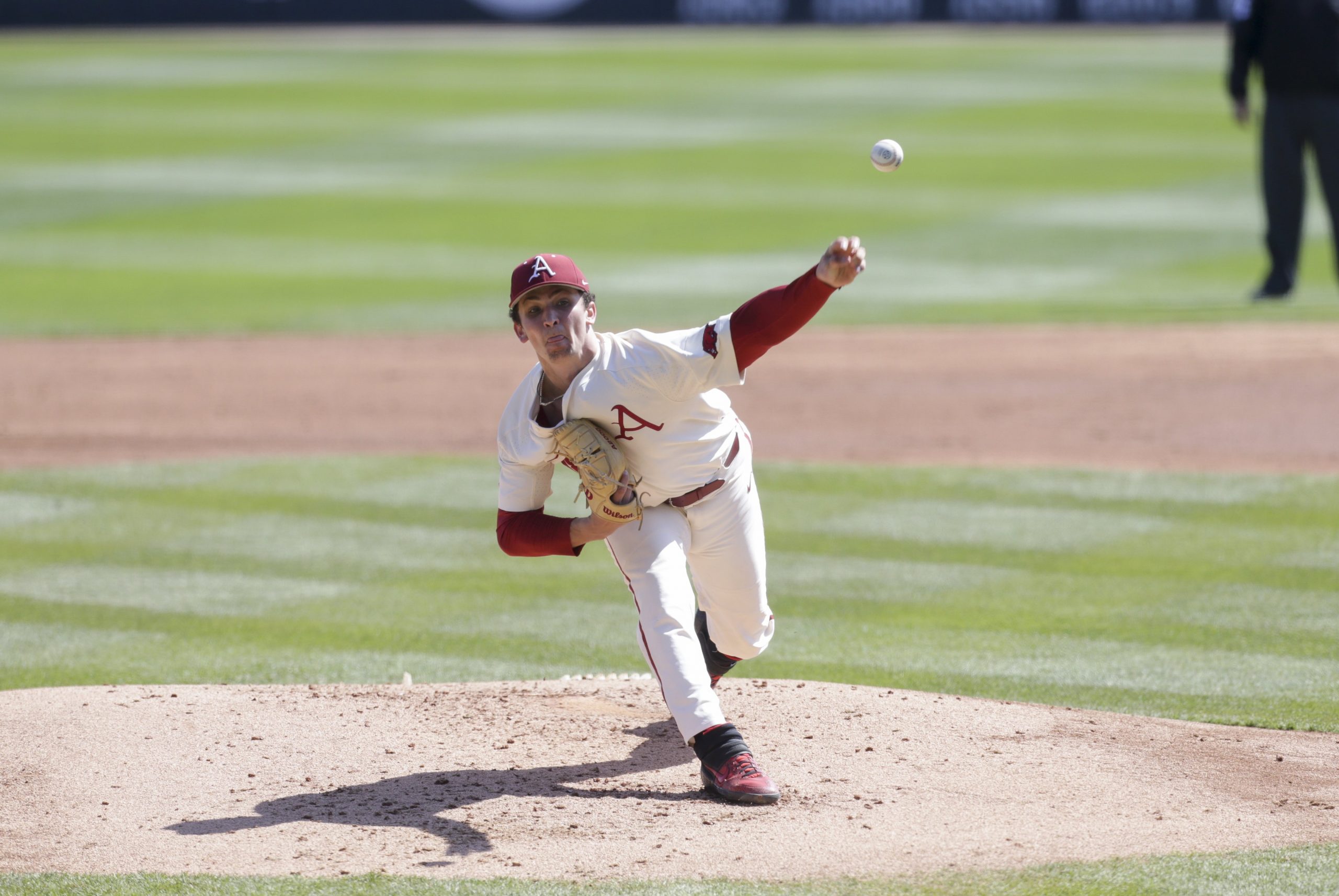 FAYETTEVILLE, Ark. — The No. 1 University of Arkansas’ response to a Friday night beatdown by Alabama was back-to-back pitching gems.

The Razorbacks followed Zebulon Vermillion’s Saturday masterpiece with another brilliantly pitched game, a near shutout in a 3-1 victory over the Crimson Tide to win the series before a crowd of 5,735 at Baum-Walker Stadium.

Left-hander Lael Lockhart mixed an effective fastball with a variety of breaking pitches into the fifth inning, Kevin Kopps escaped a jam in the fifth and worked through the eighth, then Jaxon Wiggins rebounded from giving up a solo home run to close things in the ninth with three strikeouts.

“What a great job by our pitching staff the last two days,” Arkansas coach Dave Van Horn said. “Just a great job by the entire team coming back and playing solid baseball.

“I’m just truly proud of the team. Because after what happened Friday, a little bit of an embarrassment, we all felt it. Yesterday pitched great, got a lot of clutch hits. Then really did the same thing today. It really says a lot about the character of our players.”

Opitz credited the Arkansas hurlers with stabilizing the team after the shocking 16-1 loss on Friday night.

“I mean they were phenomenal,” Opitz said. “It started with Zeb yesterday, coming out there and doing what he did, just showing the younger guys how to do it. That was huge for us.

“Then today we had a really good start by Lockhart. He gave us everything he had. Then Kevin came in here and does what Kevin does and gave us a solid outing, solid innings.

“Wiggins came out and it was awesome to kind of face a little adversity. That’s what he needs, it’s not so easy in the SEC. He bounced back phenomenally after that home run and showed a lot of maturity.”

Lockhart and wiry Alabama left-hander Antoine Jean (2-1) matched zeroes for three innings with both southpaws escaping jams in the early going. Jean was aided by two double plays, a 1-6-3 twin killing he started on a tapper by Matt Goodheart in the first inning after Robert Moore walked and Christian Franklin reached on an error, then a 6-4-3 off the bat of Moore in the third.

Jean was on the cusp of getting out of the fourth inning when he got behind Slavens on a 2-0 count. Slavens took advantage of the hitter’s count by launching the next offering through the teeth of the wind, and the low liner cleared the right-field wall for his team-high sixth home run and 20th RBI.

Lockhart fanned a career-high nine batters but ran into a spot of trouble in the fifth. He hit Alabama shortstop Jim Jarvis, who was crowding the plate on a 2-2 pitch. He retired consecutive batters on strikeouts before Andrew Pinckney singled to center field, advancing Jarvis to third.

Van Horn called on Kopps, the sinker specialist, to face switch-hittter Zane Denton, the Tide’s three-hole batter. The move worked, as Kopps struck Denton out after falling behind 2-0.

Lockhart has now worked into the fifth inning without allowing runs in three consecutive games.

“He was locating his fastball away to the lefties, then he was throwing a really good breaking ball,” Van Horn said. “He was throwing a good breaking ball to right-handers. Just a lot of good spin there and locating that fastball in and away. Stayed out of the middle of the plate and was ahead in the count. I mean, I sound like a broken record but that’s what you call pitching and that’s what he did.”

The score remained 1-0 into the sixth inning before Opitz delivered his two-out RBI single off reliever Landon Green. Opitz fell behind 1-2, noticed the Crimson Tide adjusted their infield defense with the shortstop Jarvis moving more toward the middle and, then went the other way with a shot into the hole at short, just out of Jarvis’ reach to plate both runners.

Alabama clean-up man Sam Praytor worked Wiggins with an 11-pitch at-bat to open the ninth inning, fouling off five consecutive pitches at 1-2, then drawing a couple of balls before hammering a pitch out to left field to make it 3-1 with his fourth homer.

It was the first hit and run allowed by Wiggins in his sixth appearance covering 5 2/3 innings.

Wiggins struck out Owen Diodati before walking Caden Rose. The big right-hander rallied to fan Jarvis looking on a 3-2 inside fastball, then got pinch hitter Will Patota to finish off his 32-pitch outing.