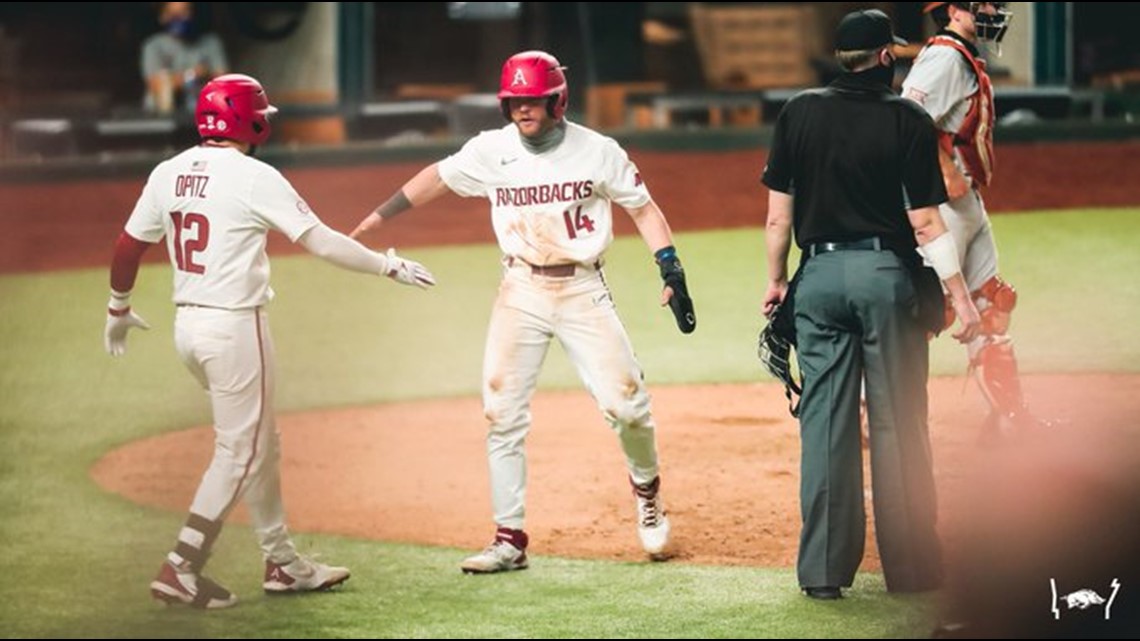 FAYETTEVILLE, Ark.— Only the rain could stop the Razorback offense.

No. 2 Arkansas picked up its first series sweep of the season, defeating Southeast Missouri State (2-5), 11-4, in a rain-shortened, five-inning game on Sunday afternoon at Baum-Walker Stadium. The Hogs broke out for 11 runs over the first four innings before the elements wreaked havoc.

With the win, the Razorbacks start the season with a perfect 7-0 record for the second straight year and for the eighth time in the Dave Van Horn era (19 seasons).

Arkansas’ offense was hot from the start despite the steady rain, launching three home runs and collecting double-digit hits for the second game in a row. Right fielder Cayden Wallace and first baseman Brady Slavens hit back-to-back dingers in the second inning to give the Hogs an early 2-0 lead.

Arkansas’ bats, however, were not done. The Hogs tacked on two more in the third, including one on third baseman Cullen Smith’s RBI double to center, and led 5-1 entering the next inning.

SEMO narrowed the gap with two runs of its own in the top half of fourth, but the Hogs had even more in them.

The Razorbacks exploded for six additional runs, led by designated hitter Matt Goodheart’s two-run homer to right center, and staked an 11-3 lead at the conclusion of the fourth inning. SEMO got one back in the fifth via a home run, but the weather had begun to take a turn for the worse.

After right-hander Kevin Kopps recorded the final out in the top of the fifth on a strikeout, the game entered a rain delay. The umpires reconvened after an initial 30-minute pause and called it for good. The ballgame, which lasted five innings, is ruled an official contest.

Arkansas will take a seven-game winning streak into next weekend’s series against Murray State. The Racers come to town for a three-game set, which gets started at 3 p.m. Friday, March 5, at Baum-Walker Stadium.