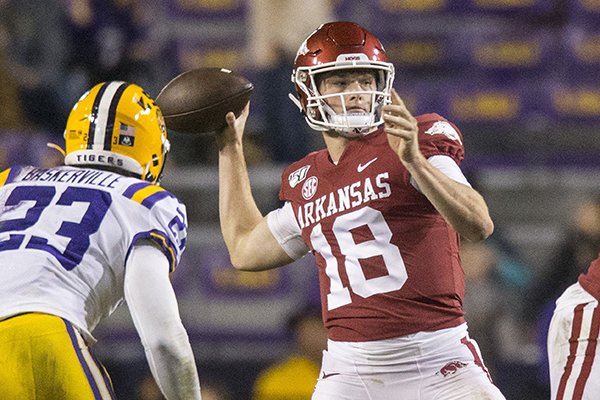 FAYETTEVILLE, Ark. — More than 350 days after the University of Arkansas and South Carolina basketball teams were supposed to play in last season’s SEC Tournament, the No. 12 Razorbacks and Gamecocks finally will meet tonight.

Tipoff is 5:30 p.m. Central in Colonial Life Arena in Columbia, S.C. The game will be televised on the SEC Network.

Arkansas and South Carolina were set to play in a second-round SEC Tournament game on March 12, 2020 — 355 days ago — in Nashville, Tenn., after the Razorbacks beat Vanderbilt 86-73.

But about nine hours before tipoff in Bridgestone Arena, the SEC announced that it was canceling the rest of the tournament because of the coronavirus pandemic.

Other conferences also canceled tournaments in the wake of the news the NBA was suspending its season because Utah Jazz player Rudy Gobert had tested positive for the coronavirus.

“I remember sitting in that arena watching Arkansas play Vanderbilt, and the news came out about Rudy Gobert,” South Carolina Coach Frank Martin said Monday. “I was like, ‘That’s not good.’ ”

After the announcements about conference tournaments being canceled, it was announced that the NCAA Tournament had been canceled along with the national indoor track and field championships.

Within a few days, all colleges sports were canceled.

“It seems like four years ago to be honest with you,” Arkansas Coach Eric Musselman said of the days before the pandemic.

For Martin and the Gamecocks, it might seem even longer.

Martin twice has tested positive for covid-19 — last May and again in January — and South Carolina went from Dec. 5 to Jan. 2 between games because the team was dealing with positive covid-19 tests, contact tracing and quarantining.

South Carolina (6-12, 4-10 SEC) had to cancel five games in that span, then had two postponements in the middle of January.

Texas A&M postponed its two games against Arkansas because of the Aggies’ positive tests, contact tracing and quarantining. One of those games is scheduled to be made up on Saturday in Walton Arena.

“They’ve been able to handle this crazy year better than us,” Martin said of the Razorbacks. “The fact is they’ve been able to remain constant, and if you remember early in the year, they were trying to discover who they were as a team. Then they dealt with the injury to Justin Smith.”

Smith, a senior forward and graduate transfer from Indiana, missed four games after undergoing ankle surgery on Jan. 1. Arkansas is 10-2 since Smith’s return and has its highest ranking in The Associated Press poll since being No. 12 in 1998.

“With Smith back, they’re solidified in who they are as a team right now,” Martin said. “We never got the opportunity to go through that journey that we all usually go through early in the year, and we’ve been trying to figure that out in league play, and it’s made it really difficult for us.”

The Razorbacks, who added nine scholarship newcomers this year with transfers and freshmen, have won nine consecutive SEC games after a 2-4 start.

“Muss has got really good players, and he’s obviously done a great job in building that stability,” Martin said. “The fact that they have not been disrupted I think has allowed them to become that.

“Give Muss a lot of credit. He’s got those guys playing at a high, high level. I don’t care what league you’re in, when you win nine consecutive league games, your team is real.

“I’m not excited that I’ve got to play against them. But as a coach, a person who tries to do this for a living, what they’re doing is pretty special.”

South Carolina had lost six consecutive games before winning 91-70 at Georgia on Saturday led by sophomore guard Jermaine Cousinard’s 23 points off the bench.

The Gamecocks have most of their key players back from last season’s 18-13 team, including juniors A.J. Lawson (averaging 17.5 points) and Keyshawn Bryant (14.4). Lawson scored 19 points last season when South Carolina beat Arkansas 79-77 in Walton Arena.

Before South Carolina lost six consecutive games, the Gamecocks won 72-66 at Florida on Jan. 31 when the Gators were ranked No. 22 having beaten West Virginia on the road.

“South Carolina is really dangerous, they play hard,” Musselman said. “And I think with some programs now, it’s hard to judge their record if there have been pauses, missed games. I think they’re a really good team and really well coached.”

Musselman said the Arkansas coaching staff will make sure the Razorbacks have great respect for the Gamecocks.

“Certainly, their game against Georgia should grab everyone’s attention,” Musselman said. “How well they played and scoring 90-plus points.”

Martin said he has tried to make this season “more about our journey as a team through this crazy time” and the lessons learned about dealing with adversity rather than focusing on wins and losses.

That being said, the Gamecocks were happy to get a victory at Georgia.

“Our spirits have been good, but winning a game made us all feel a little bit better,” Martin said. “Because it kind of felt normal again, rather than what we’ve been feeling for the last 10 months, and definitely the last four weeks from a game standpoint.”

No. 12 Arkansas men vs South Carolina

CHALK TALK Arkansas is No. 19 in the NCAA Evaluation Tool (NET) rankings. South Carolina is No. 112 … The Razorbacks have won nine consecutive SEC games since losing at Alabama 90-59 on Jan. 16 … Arkansas junior guard JD Notae, averaging 12.5 points off the bench, had 18 in the Razorbacks’ 83-75 victory over LSU on Saturday … South Carolina has won two in a row over Arkansas, 77-65 in 2019 in Columbia and 79-77 last season in Fayetteville … Razorbacks freshman guard Moses Moody hit 27 of 33 free throws the last two games against Alabama and LSU … South Carolina won 91-72 at Georgia on Saturday to break a six-game losing streak … Gamecocks sophomore guard Jermaine Cousinard, who has 14 starts this season but didn’t start at Georgia, is averaging 10.2 points. He scored 23 points off the bench against the Bulldogs … Arkansas is 6-8 at South Carolina … Dave Neal and Daymeon Fishback will be the SEC Network announcers for the game.

Arkansas moves up to #1 in Baseball America & D1Baseball

Hogs move to 7-0 with rain-shortened win