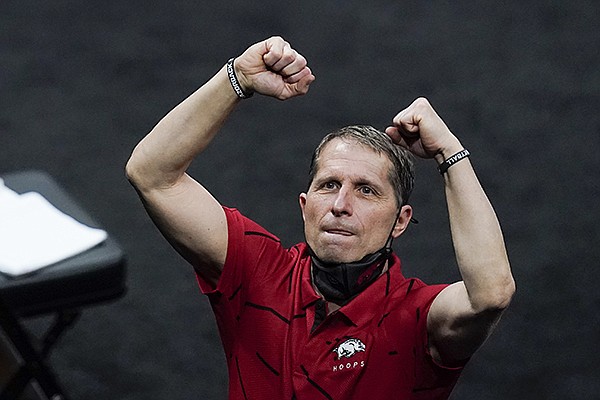 FAYETTEVILLE, Ark. — University of Arkansas Coach Eric Musselman has been to the NCAA Tournament Sweet 16 a lot more recently than the Razorbacks.

Musselman led Mountain West champion Nevada on a run to the 2018 Sweet 16 when the No. 7 seed Wolf Pack beat Texas and Cincinnati before losing to Loyola Chicago in the South Region semifinals.

Arkansas hasn’t been to the Sweet 16 since 1996 when the Razorbacks were the No. 12 seed in the East Region and beat Penn State and Marquette before losing to top seed Massachusetts.

It’s a 25-year drought Musselman’s No. 3 seed Razorbacks (23-6) will try to end tonight when they play No. 6 seed Texas Tech (18-10) in a second-round South Region game at Hinkle Fieldhouse in Indianapolis.

“So myself and the team, I think right now our only focus is Texas Tech. And then if we were able to be fortunate enough to advance, I think at that time we can talk about the meaning of it and all that.

“But right now we have Texas Tech next up on our schedule, and we have tremendous respect for their team.”

The 1996 NCAA Tournament marked the sixth time in a seven-year span in which the Razorbacks advanced to at least the Sweet 16 and included Final Four appearances in 1990, 1994 and 1995 under Coach Nolan Richardson capped by the 1994 national championship.

Between Sutton and Richardson, the Razorbacks had 10 Sweet 16 appearances in 18 seasons.

According to a CBSsports.com story, 99 different programs have advanced to the Sweet 16 since Arkansas last did it.

The list of course includes national powerhouses such as Duke, Kentucky, North Carolina and UCLA.

Nevada has made the Sweet 16 twice since Arkansas’ last appearance. The Wolf Pack also made it in 2004.

Other mid-major programs who have enjoyed runs to the Sweet 16 since 1997 in addition to Nevada and Loyola Chicago include Bradley, Tennessee-Chattanooga, Davidson, Florida Gulf Coast, George Mason, Kent State, LaSalle, Miami (Ohio), Wisconsin-Milwaukee, Northern Iowa, Ohio, Rhode Island, St. Joseph’s, Valparaiso, Virginia Commonwealth and Western Kentucky.”Arkansas has had some great history, but those numbers are also a fact,” Musselman said of all the programs to make a Sweet 16 since the Razorbacks. “I just don’t think that anyone can ever take for granted getting into this tournament, and then certainly winning a game.

“And then if you win two, and so on and so forth, it’s really, really hard to do.”

Arkansas has been close to advancing to the Sweet 16 since its last appearance.

Utah beat the Razorbacks 75-69 in a 1998 NCAA Tournament second-round game led by point guard Andre Miller, who scored 28 points and had just 2 turnovers in 38 minutes against Arkansas’ pressure defense.

“Miller probably had the best individual performance of anyone I ever played against,” said Pat Bradley, a junior on the 1998 Razorbacks.

The next season Iowa rallied from a 13-point deficit to beat the beat Arkansas 82-72 in a second-round game and end the college careers of Bradley, Kareem Reid and Derek Hood — all four-year starters

“To this day I still can’t watch film of the Utah and Iowa games,” said Bradley, now an analyst with the SEC Network.

Arkansas had shots to make the Sweet 16 in 2015 and 2017 under Coach Mike Anderson, but the Razorbacks lost second-round games to North Carolina both times.

The Tar Heels’ 72-65 victory over the Razorbacks in 2017 was especially painful because North Carolina finished the game on a 12-0 run to erase a 65-60 Arkansas lead with less than three minutes left.

North Carolina benefited from some no-calls on plays that could have been whistled as fouls on the Tar Heels.

“One or two bad calls can cost you a win,” Bradley said.

Texas Tech Coach Chris Beard is trying to lead the Red Raiders to their third consecutive Sweet 16. In the last two NCAA Tournaments held before last year’s cancellation because of the coronavirus pandemic, Texas Tech reached the Elite Eight in 2018 and the championship game in 2019.

“I think the first thing is you’ve got to get in the tournament every year,” Beard said. “If you’re not one of the 68, you’re not going to make the Sweet 16.

Beard has a good sense for the Razorbacks’ basketball history because he was coach of the University of Arkansas at Little Rock during the 2015-16 season when he led the Trojans to a 30-5 record, Sun Belt conference regular-season and tournament titles and an NCAA Tournament victory over Purdue before losing to Iowa State.

“Nobody follows and appreciates basketball in Arkansas more than me,” Beard said. “Arkansas is a basketball state with a lot of tradition.”

Beard said it “is an interesting fact” Arkansas hasn’t been to the Sweet 16 since 1996.

“But in my mind it’s a basketball school, starting with Coach Sutton and then Coach Richardson,” Beard said. “I thought Mike did a great job there.

“Now Muss is just killing it in Year Two.”

Beard recalled Nevada’s run to the Sweet 16 when Mariah Musselman, the coach’s then-8-year-old daughter, had CBS interviews with her father and Sister Jean — a nun, team chaplain and super fan of Loyola Chicago.

“That Nevada team was special and made a great run,” Beard said. “I know the country fell in love with Muss’ daughter.

“That was pretty cool. I’ve got three daughters that are pretty cool as well.”

“It definitely would be special for our group to be able to do it,” Tate said. “The way we gel and how we are together, especially the camaraderie we have built, to make it to that Sweet 16 would be a blessing.”

Bradley said despite the 1996 Razorbacks being one of the last at-large teams to make the NCAA Tournament, they were confident they could make a run.

“When you follow a coach like Nolan Richardson onto the court, you expect to be there and you expect to win,” Bradley said. “With this Arkansas team now, I think Coach Mussleman has built up the trust of these guys to where they know when they stick to his game plan, they will win.”

The Arkansas-Texas Tech winner will play the Florida-Oral Roberts winner in the South Region semifinals. … If the Razorbacks win today, they’ll advance to the Sweet 16 for the first time since 1996. … Texas Tech has made the Sweet 16 in each of the past two tournaments, when the Red Raiders reached the Elite 8 in 2018 and the championship game in 2019. … Arkansas beat Colgate 85-68 in its first-round game on Friday while Texas Tech beat Utah State 65-53. … Arkansas G Jalen Tate, a graduate transfer from Northern Kentucky, had 6 points, 6 assists, 4 rebounds and 3 assists when Texas Tech beat the Norse 72-57 in the 2019 NCAA Tournament. … Junior G JD Notae is averaging 13.3 points and 3.2 rebounds off the bench for the Razorbacks. … Arkansas and Texas Tech, former Southwest Conference rivals, are playing in a tournament game for the first time since the 1987 SWC Tournament when the Red Raiders won 73-59. … Texas Tech Coach Chris Beard and Arkansas Coach Eric Musselman faced each other during the 2017-18 season when the Raiders beat Nevada 82-76 in overtime in Lubbock, Texas. … The Red Raiders won the most recent meeting, 67-64 in Lubbock on Jan. 26, 2019, in the Big 12/SEC Challenge.