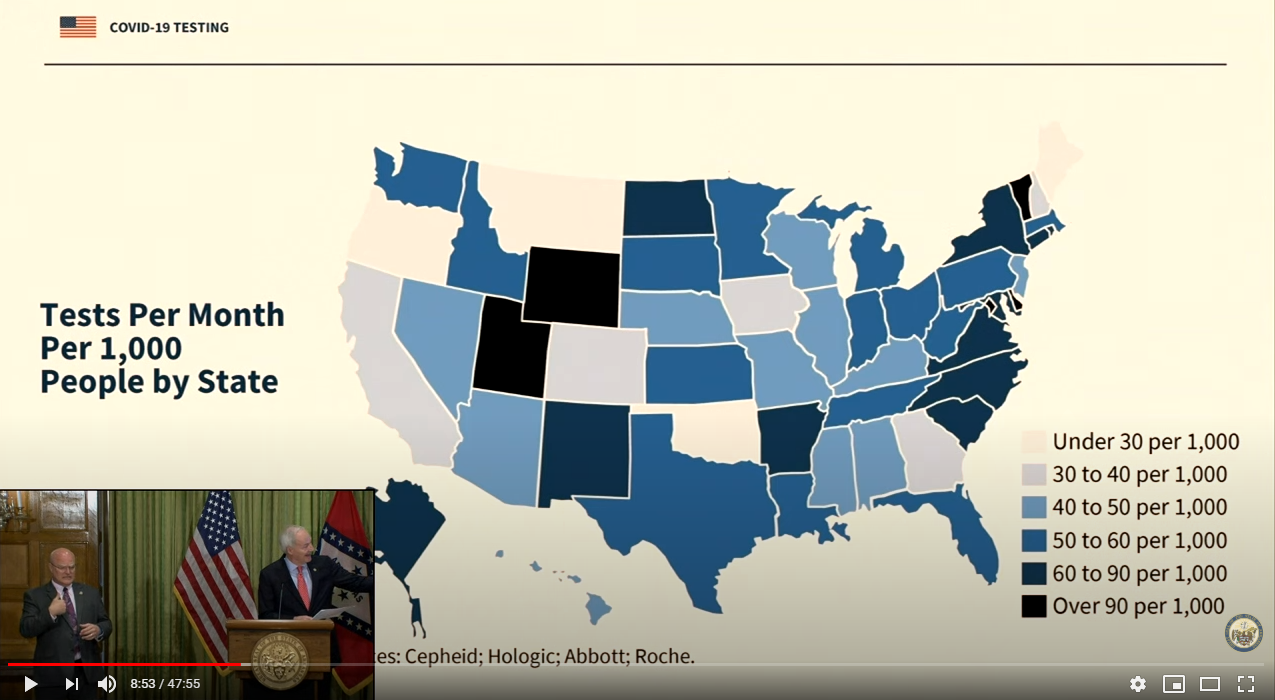 On Monday, Governor Asa Hutchinson showed off a map during his daily COVID-19 briefing. He said it came from the White House and shows per month, Arkansas is testing 60-90 people per 1,000.

“You can see that Arkansas is doing very well in terms of per capita testing,” Gov. Hutchinson said.

Only, it turned out to be false. Using testing data on the state Department of Health website, our math put that number at 6-9 per 1-thousand. The director of the Center for Business and Economic Research at the University of Arkansas, Mervin Jebaraj checked our work.

He has been trying to find out where the other numbers came from.

“There is absolutely no documentation I’ve seen behind it. I’m sure someone’s asked the federal government to provide that documentation behind it but I haven’t seen it yet, so I don’t know what number they used to get there,” he added.

On Tuesday, Gov. Hutchinson admitted the numbers do not line up.

“This does seem to go against that grain. The only explanation I see it might be referring to capacity,” he said.

We asked the federal government. A White House spokesman said the map is meant to show testing capacity on high throughput machines. We also asked the medical equipment companies listed as sources on this map to confirm it sent the data. One got back to us.

Michael Watts with Hologic told us, “Hologic doesn’t actually do any COVID testing ourselves. We sell our tests and instruments to clinical labs nationwide, including in Arkansas, and they do the actual testing. We did provide the Administration with a list of our instruments in Arkansas.”

When asked about the misinformation Gov. Hutchinson provided on Monday, he said, “I probably should’ve called the White House and looked at that a little more closely, but as you know I like to share data points as I receive those, so I should take some responsibility for that.”