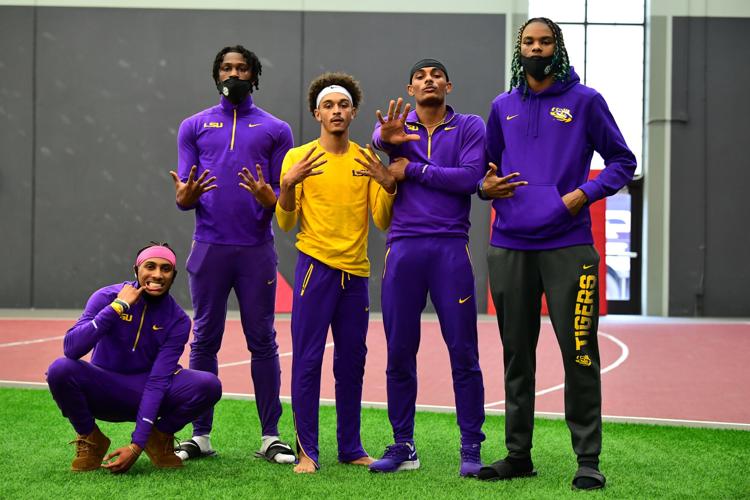 “To have five athletes win SEC individual titles is special, and I’m so proud of them,” Head Coach Dennis Shaver said.

Senior JuVaughn Harrison received the Cliff Harper Trophy, which is given to the highest point scorer of the meet.

Harrison swept the high jump and long jump, claiming 20 points for the Tigers. Harrison came into the high jump as the two-time defending indoor SEC champion and secured his third straight high jump SEC title with a mark of 7-feet, 2.5-inches.

“The high jump was a good, smooth start for me,” Harrison said. “It meant a lot to me [to win the high jump title], and after I cleared the last bar, my focus was on the long jump.”

Harrison clinched his second SEC title of the day on his first attempt in the long jump.

“I was a little surprised by the mark,” Harrison said about his jump. “The run felt good, the takeoff felt good, but I didn’t think it was as far as that. I saw the 27-foot, 4-inch mark on the board, and that made me happy. I knew I had that in me, and it felt awesome to get it out there in competition.”

The Tigers claimed both the men’s and women’s 60-meter hurdles. Milan Young secured her first SEC title with a personal record of 8.03 seconds. With this victory, Milan extends the 37-year win streak that a woman from the LSU program has won an individual SEC title.

Damion Thomas clinched his title with a personal record of 7.60 seconds. Eric Edwards Jr. finished second behind Thomas with a season best of 7.67 seconds.

Noah Williams, a transfer from Akron University, set the LSU school record in the 400-meter dash with a time of 45 minutes, 26 seconds.

Terrance Laird clinched an SEC title in the men’s 200-meter dash to win his second straight title. Laird ran a 20.28, setting an LSU school record and a 2021 world lead.

The women’s team had contributions from freshman Favour Ofili who ran a Nigerian indoor national record of 22.75 seconds in the women’s 200-meter dash, the fifth fastest run ever by a U20 athlete in world history.

The Tigers will finish their indoor season with the NCAA Indoor Championships March 11-13 at the Randal Tyson Track Center in Fayetteville, Arkansas.