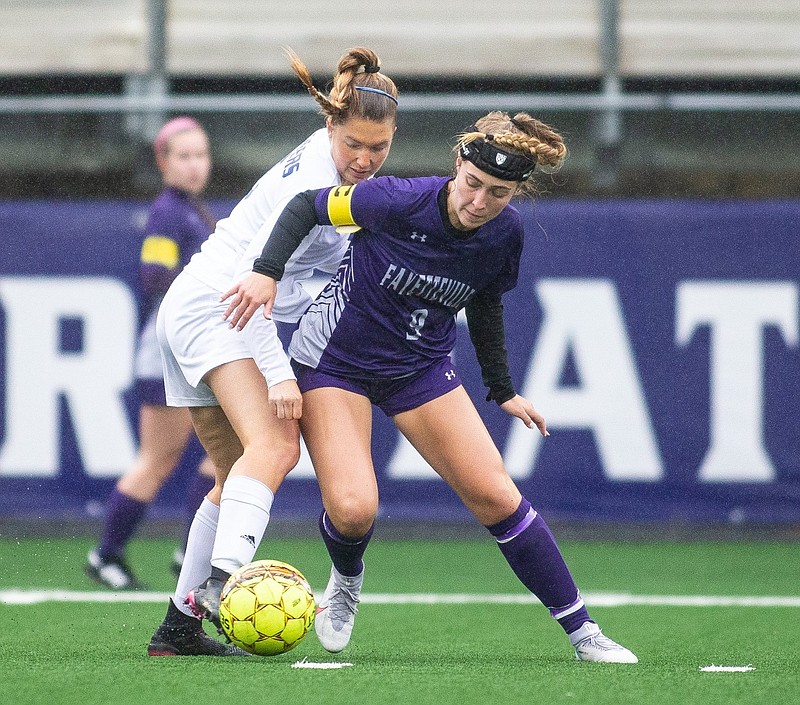 FAYETTEVILLE, Ark.– Rogers and Fayetteville played to a scoreless draw Friday on a miserable night for soccer at Harmon Field.

The cold and rainy weather was definitely a factor Friday, when extended ball control and completed passes were rare. Fayetteville, which moved to 7-0-2 in 6A-West Conference play, managed seven shots on goal and Rogers four in 80 minutes of play. Scoreless ties are not unusual in soccer and both coaches credited their players for maintaining a high level of intensity throughout the match.

“Both teams played at an extremely high level, I thought,” Fayetteville coach Joe Thoma said. “The first half, especially, the rain was coming down in the players’ eyes and everything. But both teams kept extremely high concentration levels, which shows you how much was on the line. It was a fun game for everybody to watch.”

Fayetteville and Rogers each added a point in the 6A-West Conference standings after the Lady Bulldogs edged the Lady Mounties 3-2 earlier in the year. Both teams won on Tuesday to set up Friday’s important matchup. Fayetteville beat Bentonville West 2-1 while Rogers topped Fort Smith Southside 3-1.

Friday’s game was played during a downpour and players were soaked within minutes after taking the field for warmups.

Fayetteville missed two good opportunities to score with less than 18 minutes left in the game. A Fayetteville player missed on a rebound near the box following a corner kick and another Lady Bulldog couldn’t get her foot on the ball while in space minutes later to the right of the Rogers goal.

Rogers junior goalie Karime Silva stopped seven shots on goal to post the shutout for the Lady Mounties, now 6-2-1 in the league.

“Karime Silva did a great job keeping us alive,” Rogers coach Oscar Cardona said. “We were hoping for the win, but it was still a good outcome for us. These girls came out and they were fighting literally every second. They knew how much this game mattered.

Fayetteville goalkeeper Haley Woodward left the field early in the second half and was replaced briefly by a backup after Woodward collided with a Rogers player and fell to the turf. But Woodward, a senior who signed with Houston, returned less than two minutes later and continued in goal for the Lady Bulldogs.

Both teams barely threatened in the first half when Fayetteville had four shots on goal and Rogers managed two. Fayetteville had a scoring opportunity with two minutes left in the first half when Caroline Bertaloto passed to Maddie Wilburn just outside the box in front of the Rogers goal. Wilburn turned around and got her foot on the ball, but the scoring attempt was stopped by Silva, the goalie.

Jones stars in contest of passing