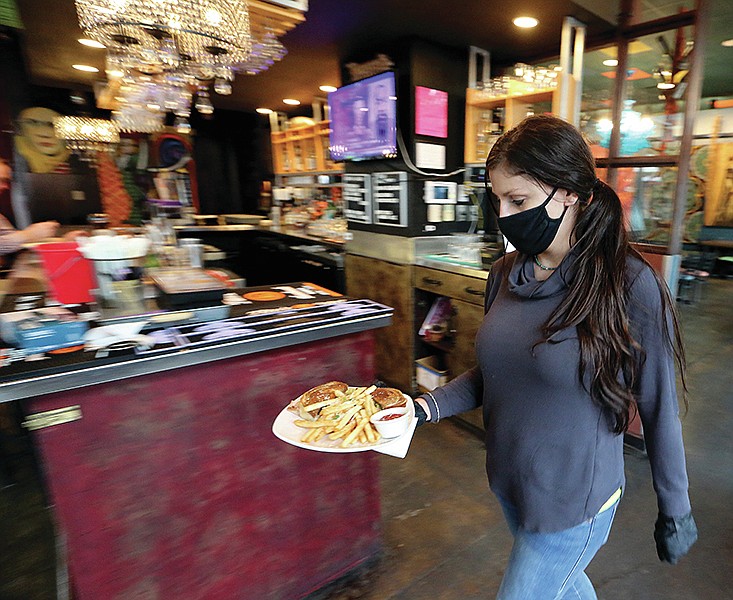 Arkansas – Business owners across Arkansas say they are unlikely to change how they operate after learning Friday that Gov. Asa Hutchinson removed restrictions such as capacity limitations effective immediately.

Hutchinson extended the state’s public health emergency until March 31 and removed all health directives except for the mask mandate. The directives are now guidelines, Hutchinson said Friday during a news conference.

“We welcome the relaxation of some of the executive order,” said Randy Zook, president and CEO of the Arkansas State Chamber of Commerce. “It is going to give businesses some opportunity to make some good choices, to get closer to a normal environment.”

Restaurants, event centers, hotels and other entertainment businesses can now have more flexibility in how they run their businesses, he said.

“They will have to be careful,” Zook said. “You can do what you want, and you can do what is smart. A lot of customers are going to expect you to be reasonable.”

Montie McNulty, CEO of the Arkansas Hospital Association, said businesses should keep in mind a few things when deciding how to respond to the government changes.

“If there is something that didn’t make sense to them, they can change it,” McNulty said. “Hopefully we will continue to make people feel comfortable, especially dining, so that business can return. If they are not comfortable, they won’t be there.”

Businesses also will need to think about liability concerns and their employees, she said.

“Until the restaurant staff receives the vaccination, they might want to voluntarily continue with the present operations,” McNulty said.

The mask mandate will remain until March 31. It will be lifted at that time if certain health thresholds are met, such as a combined PCR and antigen positivity rate at 10 % or less.

“We have laid off people, we’ve furloughed,” Marion said.

Marion said Friday that he was uncertain how the arena would respond to the lifting of capacity restrictions for large gatherings.

“The answer is, we are not sure yet,” Marion said. “Give us some time to digest this and know what it really means.”

Even though the arena is allowed to start events again, it doesn’t mean it can.

“I’m in a business where I have no control over my inventory,” Marion said. “Just because I can put 17,000 in a building, if the artist isn’t touring, it doesn’t matter.”

There has to be enough arenas open for a tour to be profitable for an artist, Marion said.

There is uncertainty in customer sales as well, he said. He said it’s likely people won’t be comfortable until there is a better coverage of a vaccine and lower case numbers.

“Just because we can do something doesn’t mean we will,” he said.

The arena has begun booking some acts for the future, including Elton John on Jan. 29, 2022.

Don Dugan, co-owner of Little Rock enterprises Dizzy’s Gypsy Bistro, Dungan’s Pub, South on Main and Stratton’s Market, said he doesn’t have any plans to change the way he operates.

“It is good to know that we have options,” Dugan said. “It is not anything written in stone and we aren’t going to get fined.”

It also is encouraging that coronavirus numbers are moving in a positive direction, which means things might be easier for the restaurant in the future, he said. Currently his businesses are operating at 50% to 33% capacity because of 6-feet social distancing efforts.

“It is still incumbent on us to be responsible,” Dugan said. “We will still do these things and make sure our guests feel comfortable.”

Like other owners, Dugan has invested in his proprieties to accommodate the pandemic restrictions, which includes adding a patio at South on Main. He also has used to the time to update some of his buildings.

Helen Grace King, co-owner of @The Corner, was shocked to hear the news Friday afternoon.

“I think this is an exciting time for the community, if we are being safer and having less cases,” King said. “I don’t know where we stand, but I think we will continue outdoor dining for lunch.”

King remodeled her kitchen and indoor space to support dining outside. She also invested in heat lamps to warm the area. It won’t be easy to switch back to indoor eating.

“It has taken a lot for us to create this outdoor experience, financially, emotionally and physically,” King said.

Even though the restaurant likely will remain the same for some time, King said she appreciates the letup on restrictions.

“I’m so thankful that as a small business we are able to make this decision on our own,” she said. “I love that the government trusts us.”

Brian Evans, owner of Eclectic Kitchen in Fayetteville, said he is operating at about 40% capacity.

“I’ve had to lay a lot of people off and it has been unfortunate, but I have no plan on bringing them back anytime soon,” Evans said.

Evans said it would be premature to open up to full capacity. He said the entire population needs to have vaccinations before he feels comfortable with that idea.

“I think that will create a lot of problems,” he said. “I’d rather go belly-up knowing I did the right thing.”

Countdown to tipoff: LSU vs. Arkansas