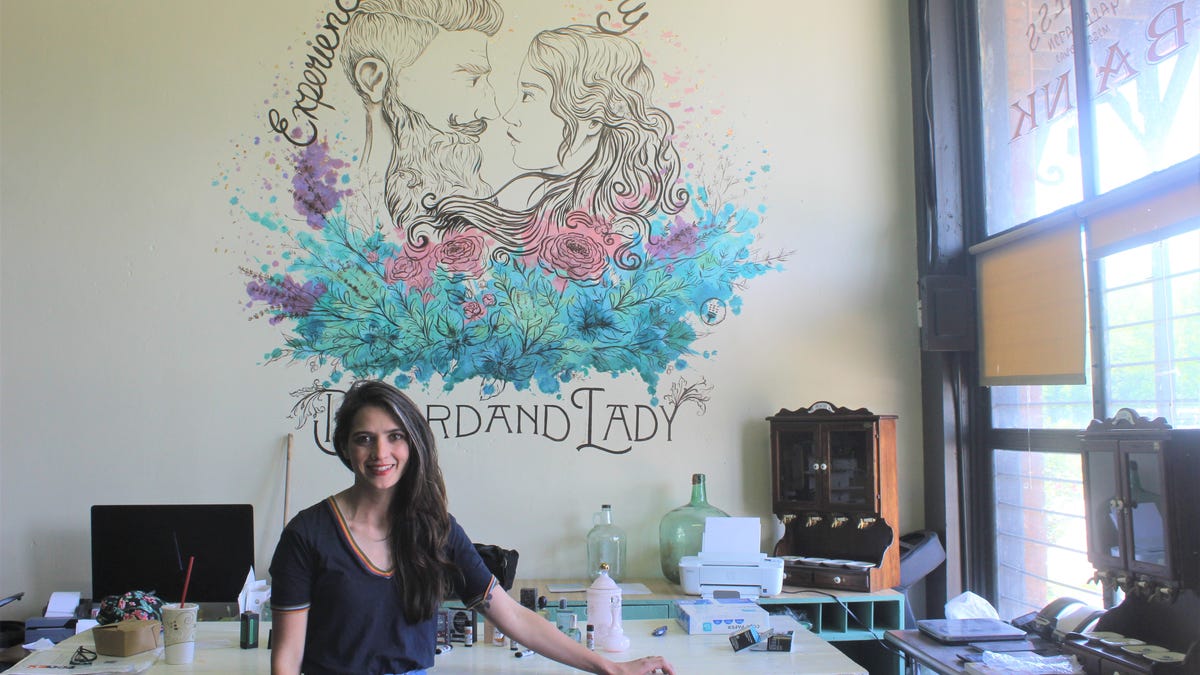 FAYETTEVILLE, Ark. – In the tiny town of Chester sits a historic hotel from 1887 that is currently being renovated into a bed-and-breakfast.

Lacey Hendrix and her husband Lance are renovating the Col. Jacob Yoes building, also known as the Chester House Inn, in Chester.

Lacey Henrix is also the owner of Beard and Lady a personal care and grooming products company.

The couple had a desire to renovate the Chester House Inn as a hotel again, adding an event space, stage and showcase their grooming products in a hotel setting while having a brick-and-mortar space to sell their products along with general store merchandise.

“Because I grew up here I’ve been familiar with the building here in Chester, I stayed here as a kid,” Hendrix said.

Hendrix grew up in Schaberg, a small community just nine miles from Chester and Mountainburg schools and the University of Arkansas-Fort Smith.

The building ceased operations about two and half years ago. During its previous life, it housed an antique store, but according to Hendrix, the hotel wasn’t fully operational when it was open.

In its long history, the building has housed a post office, doctor’s office and a saloon in addition to the hotel.

It was while riding the Van Buren excursion train that Hendrix saw the for sale sign on the old hotel from her childhood.

This sprouted the idea and Hendrix contacted the previous owners, whom she knew personally, and gave them an offer.

“We’re hoping to have a bed and breakfast feel,” Hendrix said. “There are ten rooms upstairs, there’s a dining hall, we built a stage on the general store side for live music and events.”

Hendrix wants to utilize the store section of the property to sell her products and possibly add in a general store.

When the building was purchased there was a lot of work to be done. On top of severe water damage from leaks in the roof, they replaced all of the dining hall flooring and the complete back half of the general store area.

That’s not to mention 30,000 bees which had to be removed from the second floor.

They added new copper gutters to not only remedy the water issues but also give the building the classic look.

“It’s on the historic registry so we are trying to keep everything to their standards,” Hendrix said. “The wood windows, the paint that we are using, all of the doors, the tin tile ceilings, and the light fixtures are to the period of the late 1800s.”

The Beard and Lady Inn still has the original merchandise shelving that was shipped from St. Louis by train in 1887.

The former hotel is only part of their plan. Hendrix has also purchased the Mount Olive United Methodist Church in Van Buren.

The church was built in 1889 for a congregation that consisted of freed slaves when it was organized in 1869.

“After the hotel is finished, we want to add a few things and write out the history of the church,” Hendrix said. “Essentially, you can get married at the church, ride the train with your wedding party and come to the hotel.”

The hotel has a bit of a haunted history as well. According to history, a saloon was connected to the hotel, and a man left the saloon one evening and couldn’t get into his room. The man fell asleep outside and froze to death during the night. According to Hendrix, the story goes that he will pull covers off of patrons or roam the halls at night.

“At some time in the 1920s, I think it was used as a brothel,” Hendrix said. “There are stories of two women who can be seen looking out of the window.”

Hendrix hopes that this bed and breakfast can bring in more visitors to the small town of Chester.

“The building holds a pretty special place for most people,” Hendrix said. “There’s a lot of memories and it’s a prominent thing in Chester.”

She has been in talks with the owner of the excursion train to possibly make Chester a stop on their route.

The Beard and Lady Inn plans to open in late summer 2021.