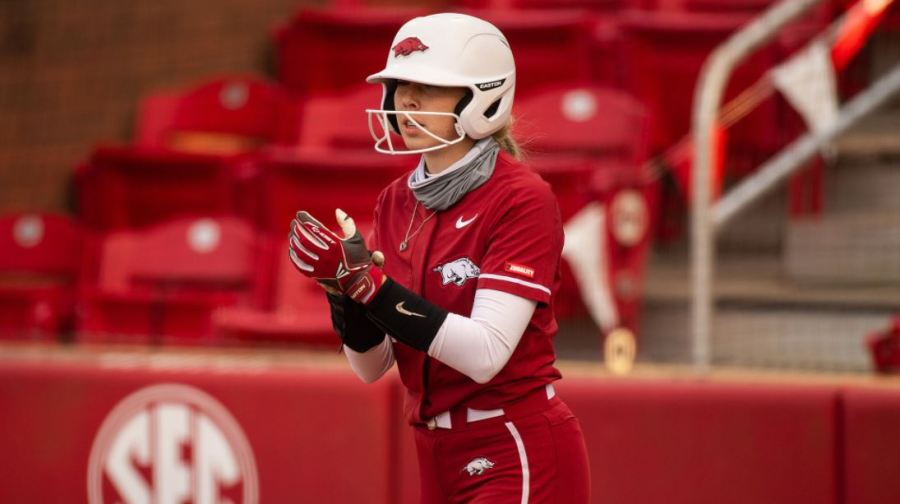 Haff was named the SEC Co-Pitcher of the Year, a USA Softball Collegiate Player of the Year Top 10 Finalist and two-time SEC Pitcher of the Week this season. She logged a 1.58 ERA in 177.0 innings pitched and limited the opposition to a .188 batting average. The Winter Haven, Fla. product’s 23 wins are the eighth most nationally, and 180 strikeouts rank 35th and third in the SEC. During conference-only play, Haff threw 87.0 innings and struck out 79, compared to 15 walks, while holding opponents to a .197 batting average. On Feb. 26, she threw the second no-hitter of her career against Texas Tech, and was one error away from a perfect game. Haff’s 74 career victories are the most in program history. The right-hander previously earned second team honors in 2018 and third team recognition in 2019.

Burnside smashed the Arkansas single-season program home run record and is tied for the fifth-most home runs in SEC history, blasting 24 bombs this season. Along with Haff, she was named a USA Softball Collegiate Player of the Year Top 10 Finalist, All-SEC First Team and earned two SEC Player of the Week awards. Burnside ranks second in country in homers, ninth in total bases (128), 13th in slugging percentage (.889), 19th in walks per game (0.77) and 24th in RBI (51). The Natural State talent total a career-best four two home run games against Oklahoma State, Southeast Missouri, Texas Tech and South Carolina. In the three-game conference-opening series in Columbia, Burnside clubbed four home runs and plated seven RBI. She posted a five RBI game against Southeast Missouri. Burnside hit .347 and is the only player in the SEC to register at least 50 runs and 50 RBI.

Gibson leads the Razorbacks hitting .363 with 58 hits and tied for the team lead driving in 51 runs. The first baseman slugged 15 homers to rank ninth in the SEC, and her 16 doubles place 14th nationally. The Murrieta, Calif. native hit two grand slams, which included a walk-off shot against Drake. She was also named to the All-SEC Second Team, SEC All-Defensive Team and earned SEC Player of the Week honors, hitting .400 with six hits in the series sweep over Ole Miss. Against South Carolina, Gibson went 5-for-5 with two doubles, a run scored and a walk, and is one of 12 players across the country this year to total five hits in a game. Gibson is making her third appearance on an all-region team and earned a first team nod for the first time.

As a true freshman, Gammill provided pop to the Razorback lineup, slashing .310/.474/632 and hitting eight home runs with 24 RBI. She missed time during the middle of the year due to injury and returned to the lineup going 3-for-3 with a homer, two RBI and two runs scored against Missouri State. The Beebe, Ark. product reached base at a .444 clip over Arkansas’ last 15 games. Gammill homered in just her second collegiate game at McNeese and hit one of the Razorbacks’ four home runs in the first inning against Texas Tech, setting a program record for round trippers in an inning.

Malkin is enjoying the best season of her career, mashing 16 homers, and driving in 38 RBI while slashing .265/.356/.600. Her 16 bombs are third-best in a season in program history, and she launched two two-homer games against McNeese and Central Arkansas. The Broomfield, Colo. native hit 10 home runs in her three prior seasons combined. Malkin spent most of the season in the lineup as the designated player, but also saw time in right field and at first base.

McEwen continued her career trend of being an on base machine, recording a .493 on base percentage in league games and coaxed 34 walks, The San Diego, Calif. native collected her 200th career hit this year, becoming one of just nine players in school history to reach the benchmark, and her .464 career on base percentage ranks second. Nationally, her 0.87 walks per game rank 11th. McEwen was named second team all-region in 2019.

The Razorbacks earned the No. 6 national seed in the NCAA Tournament and host a regional for the second time in school history. Arkansas’ postseason quest begins at noon on Friday, May 21 against Manhattan on SEC Network.

Postseason baseball is finally back at Baum-Walker Stadium

Benton steps up to plate to host state championships