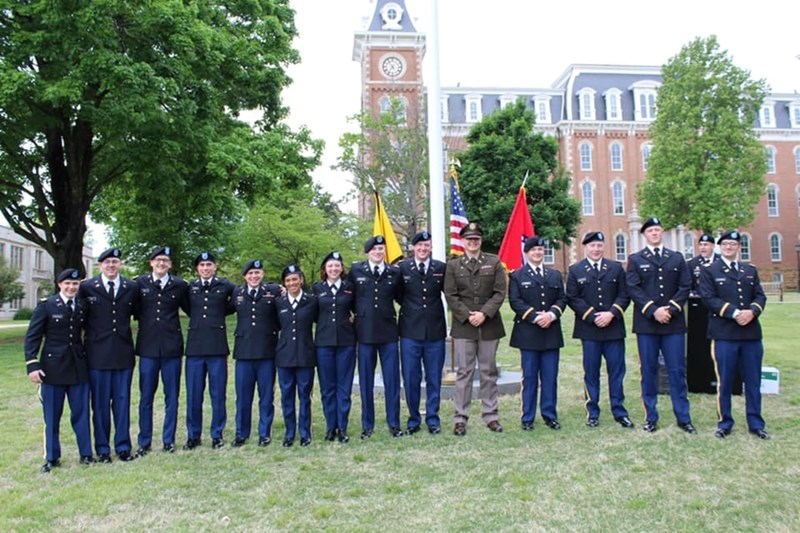 FAYETTEVILLE, Ark. – Fourteen young men and women of the Razorback Battalion — U of A Army ROTC — raised their right hand and swore an oath to “support and defend the Constitution of the United States against all enemies, foreign and domestic,” becoming the newest second lieutenants of the United States Army on the morning of Friday, May 7.

These students not only worked very hard to obtain their academic degrees, but they additionally worked extra hard to meet the demanding requirements of the Army ROTC to become an officer in the greatest army on earth. Below is the list of our newly commissioned 2LTs, their earned degrees, as well as their Army career fields:

*These lieutenants earned the Distinguished Military Graduate Award given to those who graduate in the top 20 percent of their ROTC class, nationally. The certificate is signed by Major General John R. Evans, commander of Cadet Command at Fort Knox, Kentucky.

There were approximately 150 in attendance. The ceremony was held on the Old Mail Lawn. Col. Mike Anderson, United States Army, retired, and distinguished graduate of our program, class of 1992, was the guest speaker. Other distinguished guests in attendance included:

The Cadre of the U of A Army ROTC, Razorback Battalion, are extremely proud of our new second lieutenants. May they serve their country well.