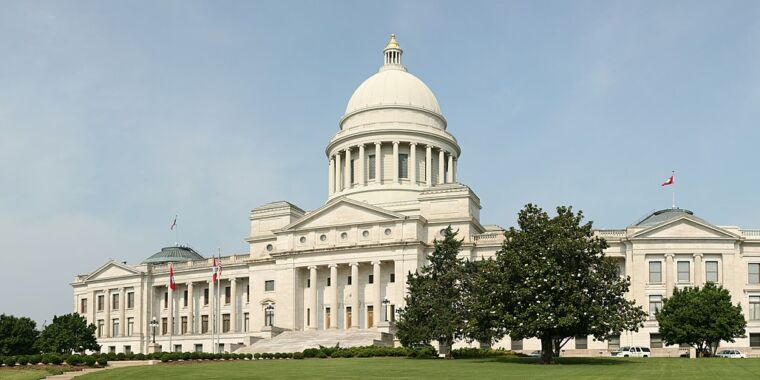 Arkansas – Last week, the Arkansas state House of Representatives passed a bill that would amend state education law to allow teachers in public schools to teach creationism as “a theory of how the earth came to exist.” As it stands, the act promotes blatantly unconstitutional behavior as made clear by a precedent set in a 1982 case involving the Arkansas Board of Education. Despite that, the bill passed 72-21, and it already has a sponsor in the state Senate.

The body of the bill is mercifully short, consisting of two sentence-long amendments to the existing Arkansas code:

A teacher of a kindergarten through grade twelve (K-12) science class at a public school or open-enrollment public charter school may teach creationism as a theory of how the earth came to exist.

This section is permissive and does not require a teacher to teach creationism as a theory of the earth came to exist.

But those two sentences are enough to land teachers and their local school system in a world of trouble, in that the permission given runs afoul of a lot of legal precedent. In a key case that involved Arkansas itself, McLean V. Arkansas Board of Education, a group of plaintiffs banded together to challenge a state law that mandated the teaching of “creation science” in public schools. The judge in that case correctly recognized that creation science was actually religious in nature, and it therefore violated the constitution’s prohibition against the establishment of state religion.

That ruling wasn’t appealed, meaning the legal precedent only applied to Arkansas. But later in that same decade, a similar case from Louisiana made it to the Supreme Court, and it reached the same conclusion. The prohibition against creation science has applied nationally since.

A visual tour of the Creation Museum

These precedents only apply to the teaching of creationism as science; there are other contexts, like a comparative religion class, where it might be appropriate to teach this idea. But the bill’s use of “theory” clearly indicates that it’s intended to insert the concept into science classes.While the state might end up being sued if this law passes, it’s just as likely that a teacher in Arkansas will exercise this permission and the suit will end up targeting the teacher and the school board they work for. If the local school board loses (which it would), there is a good probability that it would end up liable for the legal fees of whoever sues. Thus, the legislation serves as an invitation for local school districts throughout the state to rack up enormous legal bills.

Although the legal history of creationism in schools is available to anyone with a working Internet connection, the bill passed with 72 representatives, all Republicans, voting in favor. Of the chamber’s 22 Democrats, 21 voted against it, and one other didn’t vote.

It’s not clear whether these legislators are simply unaware of the legal precedents or if they are simply using this bill as an opportunity to signal their cultural affiliations. We’ve contacted its two sponsors to find out. As of publication time, neither had responded.