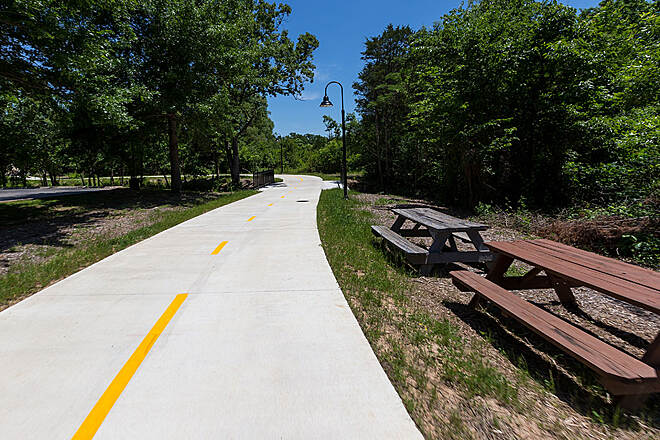 Fayetteville, Ark. – According to the officials, construction is currently underway on a project that will extend Tsa La Gi Trail from Razorback Road to a dead end in the trail about 600 feet to the west.

The trail will have a continuous path to Town Branch Trail which runs south and east to Frisco Trail at Walker Park.

The city is also in a cost-share agreement with the developers for the installation of a pedestrian hybrid beacon crossing signal at Razorback Road. The City Council approved that agreement in March.

Another recently approved project will reroute Tsa La Gi trail from the north side of a road called Indian Trail to the south side of the street where the University of Arkansas is currently building a 12-court tennis complex.

The trail currently runs along the north side of the road and crosses several restaurant driveways. The 725-linear-foot re-route will move the trail crossing away from the intersection and run through the trees by the tennis complex to bypass the Chick-fil-A and Sonic driveways.

The City Council agreed to pay $97,030 to the University of Arkansas for construction of the 12-foot-wide re-route.