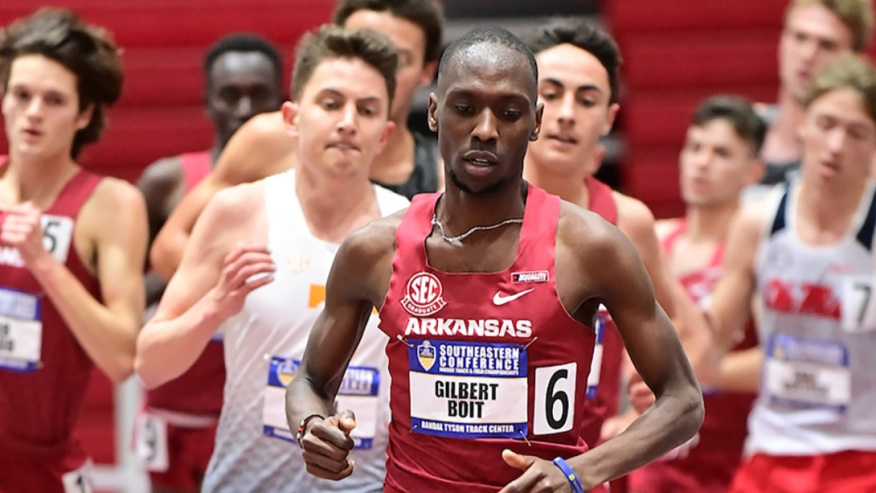 FAYETTEVILLE, Ark. – Arkansas moved into the team lead during the second day of the SEC Indoor Championships by scoring 50 points Friday from three finals inside Randal Tyson Track Center.

“I’m so proud of our guys, they were dialed in and ready to go,” stated Arkansas men’s head coach Chris Bucknam. “Ryan Brown got us started with an incredible jump and that was an amazing competition.

“Obviously, the heptathletes were working hard for two days and picked up some big team points along with some personal best scores. There’s more in the tank with those guys. I’m excited to watch those guys in the national championship.”

“I was hoping to win,” stated Boit. “Everything is about the points we can score, and we ended up with 27 as a team which is a nice total for the distance guys. We had to decide to help each other as team since we had six guys in the race.”

“In the 5k, the team points we scored there were huge,” noted Bucknam. “I’m pleased with that group, it was outstanding.”

“It’s another great year with a repeat of last year,” said Ballengee. “We did even better this year. I think we’re right on the border of having all three of us qualifying for NCAA Indoor, which is super exciting. It’s so nice having teammates competing with you in an event like this, where we can rely and lean on each other.

“A silver medal is nice again. I’m just happy we got points for our team in the SEC Championships. It gets us closer to winning another team title.”

In a long jump competition including a pair of leaps over 27 feet and four more entrants over 26 feet, the Razorbacks collected a bronze medal and six points from Ryan Brown, who produced a career best of 26-7 ¾ (8.12) competing in the first flight of jumpers.

“I don’t even have the words to explain it,” Brown said of his stellar jump. “It was well overdue. It was time to produce.

“It really was a great competition. I’ve been dreaming of a competition like this coming from a DII school. Being in this competition and finishing in the top three, I’m elated.”

Arkansas qualified eight from prelim races to Saturday’s finals and will total 19 entries on the final day.

Advancing to finals were Amon Kemboi and Andrew Kibet in the mile, Phillip Lemonious and Tre’Bien Gilbert in the 60 hurdles, James Milholen in the 400, Roman Turner and Kristoffer Hari in the 60, and Kieran Taylor in the 800.

“You have to get those guys in if you want to score points,” noted Bucknam. “So that was really good. Overall, we have 19 athletes competing tomorrow and that’s the most of any team. We’re sitting in a good position, now we just need to close the hatch. We need to finish it off.”

“Phillip is getting smoother and really comfortable over the hurdles,” said Bucknam. “That takes time, and we didn’t have him available for our first three meets this season. Seeing his progression with Coach Case, he’s doing a phenomenal job. Tre’Bien had another big race and that’s been in the works.”

Another career best was turned in by Milholen with a 46.59, which secured the eighth and final spot to reach the final.

The men’s session on Saturday starts at 12:30 p.m. with field events while running finals begin at 2 p.m.