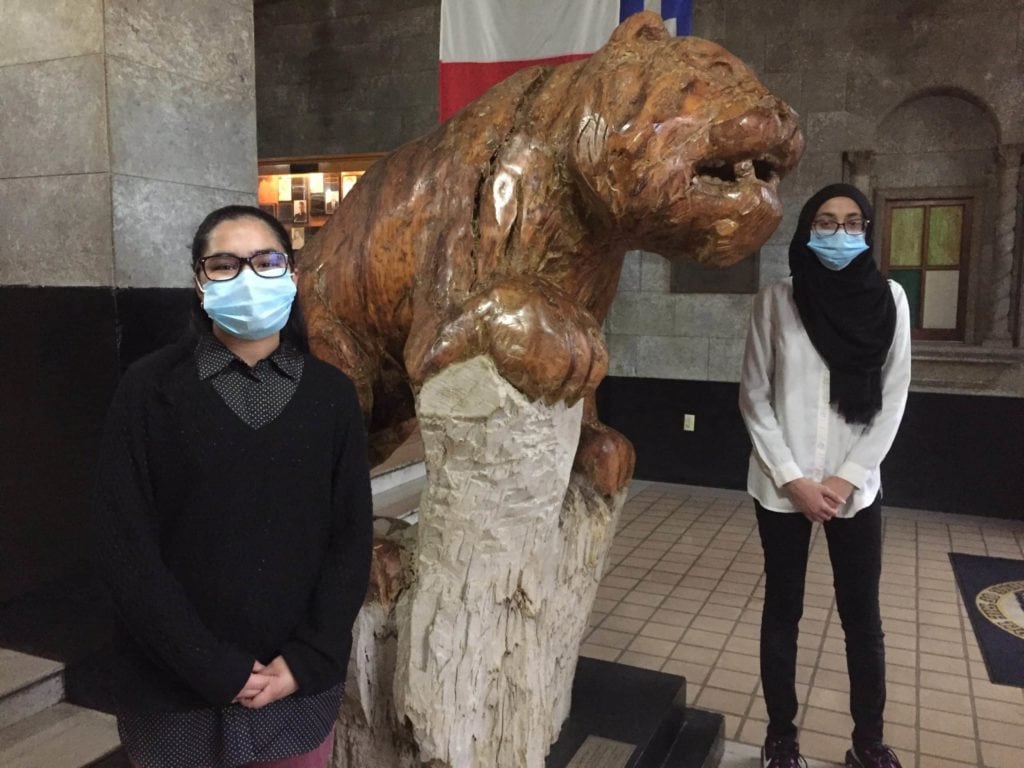 The award recognizes a student or team of students who demonstrate outstanding cancer research and/or cancer-related science. Khan, a 17-year-old junior, was the winner, and Iyer, a 16-year-old sophomore, was runner-up.

“The purpose of this award is to inspire and encourage outstanding high school students to consider pursuing careers specializing in cancer research or treatment,” said Thomas Kelly, Ph.D., associate director of Cancer Research Training and Education at the Cancer Institute. “We also hope it establishes a pipeline of future cancer research scientists and clinicians to serve the state of Arkansas.”

The Cancer Institute is Arkansas’ only academic cancer treatment and research facility. The institute’s staff of doctors, nurses, researchers and other health care professionals is dedicated to improving cancer care for the people of Arkansas and beyond.

The statewide science and engineering fair was in early April at the University of Central Arkansas in Conway with judging through Zoom conferences.

Khan’s project was “Synthesis, Characterization and In Vitro Cytotoxicity of Tunable Sized Chemo-PTT Combination Nanomedicines.” Through it, she investigated how a new type of cancer-killing agent called a nanoparticle, which kills tumor cells either chemically or with toxic molecules produced by exposure to light, could be refined for the highest efficiency. Her study included producing particles of increasing size and testing the killing of cancer cells. Through it, she showed that the smallest particles were the most effective at killing cancer cells.

Khan’s project placed fourth overall at the state level, first in her category of chemistry/biology and was an ISEF finalist, allowing her compete in the International Science and Engineering Fair.

Her motivation for the project was the challenges of lack of cancer treatment in other parts of the world, underscored by the death of her grandfather.

“Cancer is a really big problem right now, especially in third-world countries,” Khan said. “My grandfather, who lived in Pakistan, couldn’t get the same level of care that is available to us here, and he died of pancreatic cancer.” She said she plans to major in chemistry in college and pursue a career in pharmacy.

Iyer’s entry was titled “Heuristic Oncological Prognosis Evaluator (HOPE): A Novel Approach Implementing A Deep Learning Convolutional Neural Network Framework to Detect Brain Cancer, Breast Cancer, Colorectal Cancer and Lung Cancer.” In her project, Iyer used python programming language to produce an artificial intelligence program that she trained to identify tumors in digital radiograph images and digital histology images. She then tested the program’s ability to identify tumors in samples that were not in the training set, and the program was very successful in doing so.

Iyer’s project won second place overall at the state level and was an ISEF finalist at the regional fair. She has qualified to attend the international science and engineering fair and won the Pepperman-Albert special award for cancer research project.

The arrival of the COVID-19 pandemic led her to focus on cancer.

“It made me think about what other diseases were out there impacting us and cancer topped the list,” Iyer said.

For her next project, she would like to advance the current one.

Iyer said she wants to pursue a medical career and become either a cardiologist or neurosurgeon.

A cancer researcher and an educator chose the winners of the Cancer Institute’s award by watching  a posted video of the projects and listening to a livestream Zoom student presentation to a larger panel that was judging for placement overall in the fair in their category of biomedical health sciences. The judges of the institute’s award also asked the students some questions to assess their knowledge and contribution. Relevance to the cancer field, thoroughness, clarity, scientific thought and creativity all factored into judging process.

“Both young scientists articulated their projects superbly,” Kelly said. “They described what they did, the results they obtained, and what it could mean at a very high level. The judges were most impressed.”

“Both Ms. Khan and Ms. Iyer are very good at research, presentation and really know what they are doing,” said Foley.

New technology helping fix the inconvenience of an overactive bladder