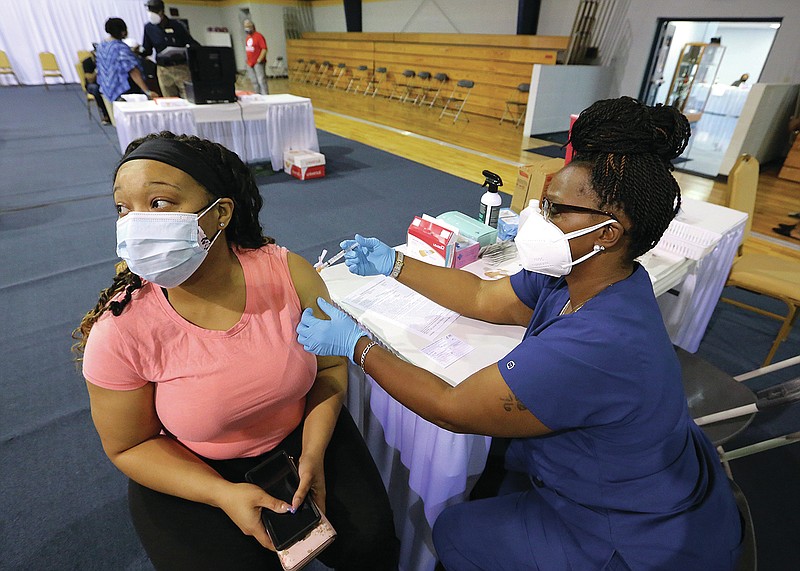 FAYETTEVILLE, Ark. – Arkansas Gov. Asa Hutchinson said Tuesday that the state will follow a recommendation by federal officials to pause the use of the Johnson & Johnson coronavirus vaccine after reports that six women developed rare blood clots after receiving the shots.

The development prompted the state Department of Health to cancel 10 vaccination clinics that had been scheduled for Tuesday, and information about others planned for later in the week was removed from the department’s website.

The University of Arkansas, Fayetteville halted vaccinations at its student health center, and Arkansas Tech University postponed a clinic that had been planned for Thursday at its Ozark campus.

Col. Robert Ator, who is coordinating Arkansas’ vaccination program, said the state was working on getting Pfizer or Moderna vaccines to Health Department clinics that had planned to administer Johnson & Johnson shots.

In the meantime, “there might be a slight pause” on Johnson & Johnson events scheduled for Tuesday and today, he said.

Hutchinson emphasized that the state has plenty of available doses of Moderna and Pfizer.

In most cases, he said, people who had appointments at pharmacies or other providers for Johnson & Johnson doses should be able to receive one of those other vaccines without having to reschedule.

“It does have an impact in some areas, but we hope that will be very short-lived,” Hutchinson said.

Hutchinson made the announcement as the state’s count of coronavirus cases rose by 224 — the third daily increase in a row that was larger than the one a week earlier.

The number of people hospitalized in the state with covid-19 fell by eight, to 148.

The state’s death toll from the virus, as tracked by the Health Department, rose by eight, to 5,673.

The U.S. Centers for Disease Control and Prevention and the Food and Drug Administration recommended pausing Johnson & Johnson vaccinations on Tuesday morning, citing the blood clots that had occurred among women age 18-48.

According to news reports, one of the women died and another was hospitalized in critical condition.

Arkansas Health Secretary Jose Romero said none of the affected women were from Arkansas.

The CDC’s Advisory Committee on Immunization Practices, led by Romero, was scheduled to discuss the reported blood clots at a meeting today.

“We have confidence in the Johnson & Johnson vaccine, but it is on pause to be sure on the treatment of any adverse reaction,” Hutchinson said.

The single-shot vaccine, made by Johnson & Johnson’s Janssen Pharmaceutical Unit, has made up a small part of Arkansas’ vaccination effort, although it has proved useful for vaccinating people at homeless shelters and other settings where scheduling an appointment for a second dose could be difficult.

According to the CDC, about 7% of more than 2.2 million vaccine doses that had been delivered to Arkansas as of Tuesday were Johnson & Johnson doses.

Of the 576,433 people in the state who had been fully vaccinated, 47,375, or 8% of the total, received Johnson & Johnson, with the rest receiving two doses of Pfizer or Moderna, according to the CDC.

“Based on the information that we have now, if it’s been a month or more since you’ve received the Janssen vaccine, your risk is extremely low” of developing blood clots, Romero said.

People who received the shot in the past two to three weeks and who develop a severe headache or chest or abdominal pain should go to an emergency room and tell the health care providers they received the Johnson & Johnson vaccine and when they received it, he said.

He called the flagging of the issue “a positive finding in that our systems for detecting these types of rare events is working successfully.”

“This is a success story and is one of the reasons why we have one of the safest vaccine programs in the world,” Romero said.

In Fayetteville, UA sent text messages canceling about 150 appointments that had been scheduled for Tuesday and today at its Pat Walker Health Center, which had been administering Johnson & Johnson doses, university spokesman Zac Brown said.

“This only reflects those we reached out to, as others called to cancel themselves before we had a chance to do it on their behalf,” Brown said in an email.

The health center didn’t have any other vaccines as of Tuesday.

Brown said the university had not yet canceled Thursday and Friday appointments while awaiting developments from the CDC advisory committee meeting.

He said UA has 850 doses remaining of the Johnson & Johnson vaccine.

“Once a determination is made by CDC/FDA, we will respond accordingly,” Brown said.

Being able to restart on-campus vaccination with the Johnson & Johnson vaccine “would be ideal for students hoping to be fully vaccinated by the end of the semester,” he added.

The text notification, provided by Brown to the Arkansas Democrat-Gazette, stated the CDC and FDA recommendation.

The message, from Huda Sharaf, the health center’s medical director, then continued: “Out of an abundance of caution, Pat Walker Health Center has decided to halt all J&J vaccine clinics in our facility as recommended by the FDA. We are canceling your vaccine appointment until further information and guidance are obtained from the CDC and FDA. We apologize for any inconvenience.”

A phone number was also provided for anyone with questions.

UA began offering the vaccine after receiving on March 4 an initial allotment of 2,500 doses, most of which went to students.

The allotment ran out on March 25, but UA received a second allotment near the end of March.

Brown said 4,050 doses had been administered as of Tuesday.

The university in social media posts has described the one-dose shots as a way for students to get fully vaccinated before the end of the spring semester.

But final exams for the university’s spring semester begin May 3, leaving a tight window for students to get both shots of the Pfizer vaccine, which are administered three weeks apart.

The two doses of the Moderna vaccine are administered four weeks apart.

The vaccine was administered at events in late March and this month at the university’s main campus, in Russellville, he said.

Last week, Strasner said 976 people had been vaccinated at four clinics held on campus since March 16.

Among other colleges and universities, many have held on-campus clinics where other types of vaccine were administered.

One pharmacy in Conway initially didn’t have enough Moderna doses to cover its Johnson & Johnson appointments, but it was able to cover the gap with help from another store that had more Moderna than it needed for the next week or so, Vinson said.

In Little Rock, Remedy Drug sent emails to about 20 people who had been scheduled to receive the Johnson & Johnson vaccine Tuesday, letting them know they could still show up to receive Pfizer shots, co-owner Laura Lumsden said.

She said a few people didn’t show up.

Those that did were “just fine with the Pfizer,” she said.

She said her pharmacy is helping with a vaccination clinic planned for Thursday at Little Rock’s Harmony Health Clinic, which provides free medical care to the uninsured.

Organizers had been planning to use Johnson & Johnson but will use Pfizer instead, she said.

“We’re really going to preach it, if you will, to encourage them to come back in three weeks, and I just hope that they will,” she said.

Lelan Stice, owner of Doctor’s Orders Pharmacies in Pine Bluff, White Hall and Star City, said he notified people who had appointments over the next two weeks for the Johnson & Johnson vaccine that they can still show up and receive Pfizer.

He said he’ll also use Pfizer instead of Johnson & Johnson at a clinic scheduled for today at Southeast Arkansas College in Pine Bluff.

He said he hasn’t heard from anyone yet who wanted to cancel an appointment because of the switch.

He said the concern about the blood clots “will heighten the vaccine hesitancy.”

“They’re going to interpret it as the vaccine not being safe or being rushed,” he said.

The University of Arkansas for Medical Sciences has received about 2,400 doses of Johnson & Johnson but has only administered 85, spokeswoman Leslie Taylor said.

“Because we have gotten the bulk of that recently, they were still discussing where to use that, and so now we’re just holding onto it,” she said.

SHOTS FOR THE HOMEBOUND

At his weekly news conference on the pandemic, Hutchinson also said people can call the Health Department’s vaccine hotline at (800) 985-6030 to schedule vaccinations for homebound elderly people.

He said the Arkansas Foundation for Medical Care, which operates the call center, will also begin this Saturday making calls to people who are overdue for their second doses of the Pfizer and Moderna vaccines.

Although the service for the homebound is available statewide, state Epidemiologist Jennifer Dillaha said the AARP began calling its members in Faulkner, Columbia, Desha and Searcy counties last week to notify them about the service, transferring those who were interested to the department’s call center.

She said the Health Department will work with ambulance services and pharmacists to schedule the vaccinations at people’s homes.

State Department of Corrections Secretary Solomon Graves also said at the news conference that the department this week began vaccinating the 7,454 of the state’s 14,120 inmates who indicated in a survey that they wanted the shots.

Graves said 719 doses had been administered as of Tuesday.

Under the department’s plan, all the first doses will be administered by April 21, and the second doses by May 19, he said.

Murphy said 3,333 of the department’s 4,786 employees have received at least one vaccine dose.

Graves said the department had 48 inmates, all of whom had recently arrived at state prisons, who had been identified as having active infections as of Tuesday and four staff members who were isolating at home after testing positive for covid-19.

Mike Poore, superintendent of the Little Rock School District, took to a YouTube video Tuesday to plead with parents to sign up their older teenagers for covid-19 vaccinations.

A recent survey of parent interest in getting their children of at least 16 years old immunized against the virus generated only a small response, Poore said in the video.

And only half of those, about 250, responded favorably to their children getting the shots.

Teenagers getting the shots, he said, can help protect their teachers, parents and extended families from the virus that is highly contagious and potentially fatal. Older people in particular are more susceptible.

“Because the mask mandate has been lifted, people think we are in the clear. That is so far from the truth,” he added.

District leaders would like to make vaccination clinics available to students and to their families. The parent interest survey will be repeated, and Poore said he is “strongly encouraging” families to respond favorably to vaccination plans.

The Arkansans who had been fully vaccinated as of Tuesday represented about 19.1% of the state’s population.

The cases that were added to the state’s tallies Tuesday included 117 that were confirmed through polymerase chain reaction, or PCR, tests.

The other 107 were “probable” cases, which include those identified through less-sensitive antigen tests.

The state’s cumulative count of state cases rose to 332,446.

The number of cases that were considered active rose by 23, to 1,663, as new cases outpaced recoveries.

The Health Department didn’t report any increase in its count of cases among prison and jail inmates.

Murphy said the Department of Corrections also didn’t have any new inmate cases on Tuesday.

The state’s count of deaths among nursing home and assisted living facility residents remained at 2,067.

The number of the state’s virus patients who have ever been on a ventilator with covid-19 rose by one, to 1,597.

Information for this article was contributed by Cynthia Howell of the Arkansas Democrat-Gazette.

Springdale Schools to end face mask policy after May 28