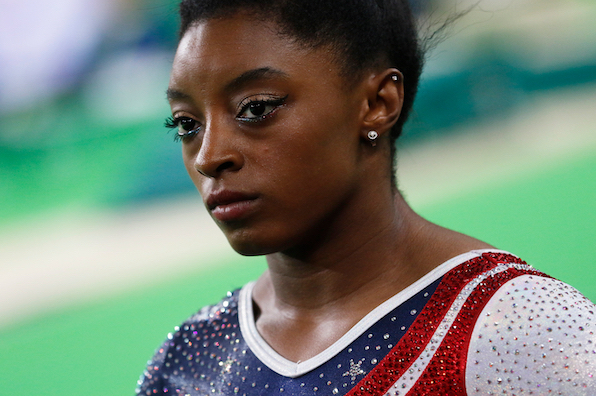 “Simone Biles has withdrawn from the final individual all-around competition at the Tokyo Olympic Games in order to focus on her mental health,” USAG said in a statement.

Biles would have been defending her all-around Olympic crowd which she earned in the 2016 Games.

“After further medical evaluation, Simone Biles has withdrawn from the final individual all-around competition,” USA Gymnastics Twitter account said. “We wholeheartedly support Simone’s decision and applaud her bravery in prioritizing her well-being. Her courage shows, yet again, why she is a role model for so many.”

The Wednesday news comes after Biles had pulled herself from the women’s gymnastics team finals on Tuesday.

On her vault attempt, Biles was supposed to attempt a Yurchenko with two and a half twists, but only completed one and a half twists in the air before landing awkwardly and taking a big step forward.

Biles scored a low score of 13.766 points and exited the floor with the US trainer. After returning to the floor, Biles was replaced by Jordan Chiles on the uneven bars and it was announced that Biles was out for the rest of the competition.

The NBC broadcast team revealed Biles had a “mental issue,” however the U.S.A. Gymnastics said it was a “medical issue.”

“Simone has withdrawn from the team final competition due to a medical issue,” U.S.A. Gymnastics said in a statement. “She will be assessed daily to determine medical clearance for future competitions.”

Biles however later clarified that the decision was due to mental issues.

“I’ve never felt like this going into a competition before,” Biles said to reporters. “I tried to go out here and have fun. And warmup in the back went a little bit better but then once I came out here…’No. Mental’s not there. So, I just need to let the girls do it and focus on myself.”

“Physically, I feel good, I’m in shape,” Biles said to Hoda Kotb on TODAY. “Emotionally, that kind of varies on the time and moment. Coming here to the Olympics and being the head star isn’t an easy feat, so we’re just trying to take it one day at a time and we’ll see.”

“I’m OK, just super frustrated of how the night played out, but super proud of these girls that stepped up and did what they needed to do and now we’re Olympic silver medalists, so it’s something that we’ll cherish forever,” Biles said. “We hope America still loves us.”

Turning young Olympic athletes into superstar celebrities clearly has a negative impact on their mental performance considering Biles has admitted to having the “the weight of the world” on her shoulders.

“It wasn’t an easy day or my best but I got through it. I truly do feel like I have the weight of the world on my shoulders at times,” Biles wrote on Instagram after the US qualifiers. “I know I brush it off and make it seem like pressure doesn’t affect me but damn sometimes it’s hard hahaha! The Olympics is no joke! BUT I’m happy my family was able to be with me virtually. They mean the world to me.”

“I’m just really proud of all three of us because we really did step up to the plate when we needed to, and I probably wouldn’t have it any other way,” teammate Suni Lee told Hoda after Biles’ withdrawal. “It’s really hard losing a teammate, especially someone so amazing.”