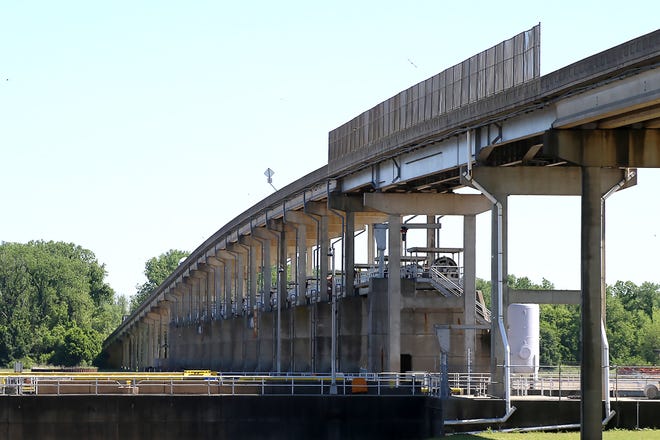 ARKANSAS – With a $230 million backlog of maintenance issues on the Arkansas River navigation system, members of Congress from Arkansas, Oklahoma and Kansas have teamed up to request the U.S. Army Corps of Engineers (USACE) direct funds to the issue.

The delegation also wants the Corps of Engineers to deepen the navigation system’s channel from 9 feet to 12 feet to increase barge payloads, as well as address a related issue in southeast Arkansas near the confluence of the Arkansas, White and Mississippi rivers.

Several Fort Smith businesses depend on the river for cheaper delivery of raw materials. In addition to serving as a shipping lane for agriculture and manufacturing products, river barges keep about 400 semi-trucks off the roads for a typical tow of eight barges carrying 12,000 tons, according to the Arkansas Waterways Commission.

The backlog in maintenance for the Arkansas River navigation system has grown $5 million in the past three years. In 2019 the system that runs from Tulsa to the Mississippi River faced a $225 million backlog of “critical” upkeep projects after being hampered for months by historic flooding in Oklahoma.

A U.S. Army Corps of Engineers spokesperson in Washington, D.C., told the Times Record about $91 million is budgeted in the fiscal 2021 Civil Work Operation and Maintenance work plan to address the Arkansas River system’s needs. However, the Corps “cannot speculate on how future funding will be allocated,” the spokesperson added.

“The MKARNS (McClellan–Kerr Arkansas River Navigation System) will continue to compete with other USACE civil works projects across the nation for future available appropriations based on projected returns on the nation’s investment,” Gene Pawlik of the U.S. Army Corps of Engineers wrote.

In 2014, it was reported a major project on the Ohio River called the Olmsted Lock and Dam project was siphoning a majority of the U.S. Inland Waterway Trust Fund money. At that time, Congress had not authorized any increases in the fuel tax that supports the trust fund. The waterways trust fund supported 50% of the U.S. Corps of Engineers projects at the time. Pawlik explained the Ohio project is now complete, but funding for the $3.9 billion Olmsted project was funded from the construction account cost-shared with the Inland Waterways Trust Fund. The Operation and Maintenance funds are a separate pot of money, he explained.

The members wrote, “We urge that the U.S. Army Corps of Engineers (Corps) prioritize and commit robust funding to the McClellan-Kerr Arkansas River Navigation System (MKARNS), including deepening, operations and maintenance of the MKARNS, and construction of the Three Rivers project in the FY 2022 budget request.”

The delegation also noted the 445-mile navigation system completed in 1971 “is the safest, most economical, and fuel-efficient way to move our nation’s goods for use domestically and for export.”

In a typical year, about 12 million tons of commerce traverses the Arkansas River navigation system, valued at more than $3.5 billion. If the system was deepened from 9-feet to 12-feet, the capacity of each barge could increase by nearly 400 tons and increase the value of business sales by over $250 million, the delegation added.

A system failure would directly impact jobs and businesses

Through the enactment of the Water Resources Development Act of 2020, Congress provided the Corps with the flexibility to continue carrying out construction of the deepening of the Arkansas River navigation system. Continuing the deepening of the river’s channel would directly benefit the 56,000 jobs for surrounding farmers, manufacturers, and other producers who contribute over $8 billion in sales and nearly $300 million in state and local tax revenue as a result of the system’s efficient operation, the letter added.

“The future economic viability of the MKARNS is at risk as there is currently more than a $230 million backlog in critical maintenance along the entire 50-year-old system,” the letter states. “This includes locks, dams, and other important equipment that is deteriorating to dangerous conditions … A critical failure on the system could result in it being shut down for months and even a temporary shutdown could put future use of the system at risk, as businesses would no longer see the MKARNS as reliable and would likely find other means to transport their goods”

Losing navigation on the entire MKARNS would cost over 6,000 jobs and cause the national gross domestic product to decline by $723 million, the delegation added.

The delegation is also calling on the Corps of Engineers to complete a multi-million-dollar project in southeast Arkansas where the Arkansas and White rivers meet near the Mississippi River. It’s called the Three Rivers project and would help ensure the navigation system keeps flowing safely. Congress authorized the Corps to construct the Three Rivers project in 2018 “to promote a long-term sustainable navigation system by reducing the risk of a cutoff forming near the entrance channel of the MKARNS between the Arkansas and White Rivers.” The Corps has already funded to completion preconstruction, engineering, and design work and is ready for construction in FY2022, the delegation’s letter explained.

This Is Where Arkansas’ Health Care System Ranks in the US