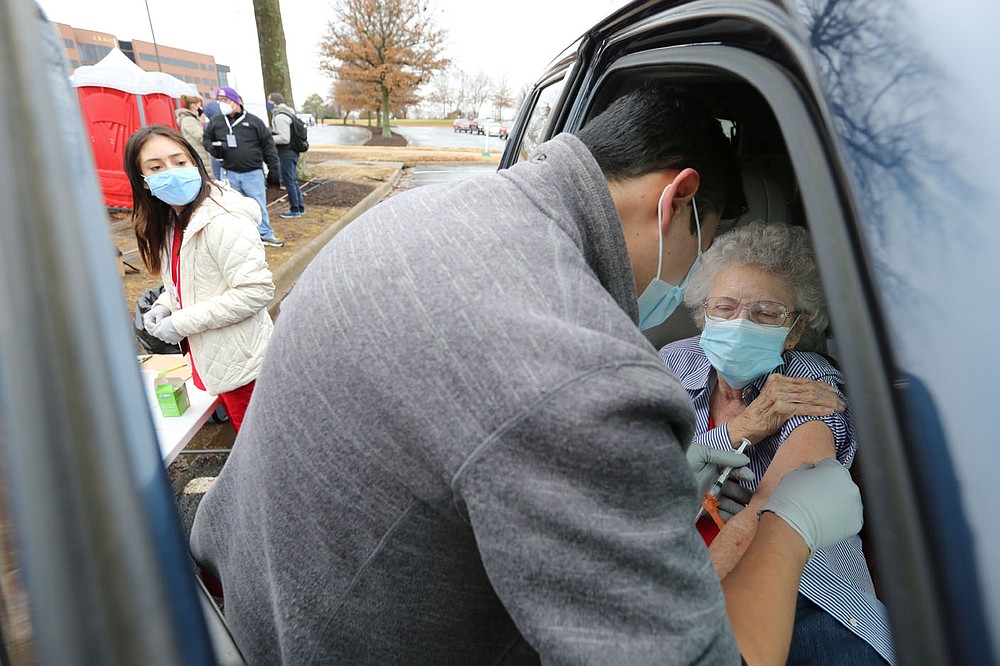 The Northwest Arkansas Council organized the event with 250 volunteers on the parking lot of J.B. Hunt headquarters in Lowell. Most of the vaccine recipients were Benton County residents 70 and older. The council is a nonprofit organization made up of business and community leaders in the region.

Ryan Cork, who oversees health care for the council, said as the all-day event was wrapping up that it went well and organizers hope the mass vaccination clinic will serve as a playbook for similar events as more groups of people are allowed to get vaccinated.

The council created a volunteer database for future events, Cork said. Second doses will be given March 26 to everyone who received first doses Friday.

Gov. Asa Hutchinson toured the event in the afternoon.

“I asked the volunteers how quickly they could organize another event like this,” Hutchinson said. “They said they could do this tomorrow and the next day if you give us the vaccine.”

Duplicating that kind of event is key to getting the pandemic under control statewide, the governor said.

“This is so representative of the Northwest Arkansas community,” the governor said. “They come together in an organized way. It’s an exciting day, to see a mass distribution of this magnitude.”

He was especially impressed with the availability of language interpreters of Marshallese and Spanish along with public outreach to those minority communities to get them to come, he said.

Hutchinson announced Friday morning he was extending the emergency declaration through March but said public health directives will become guidelines, effective immediately. He described directives as mandates “with a potential penalty after due process” and guidance as “a strong recommendation based on medical advice.”

The restrictions being lifted include capacity limits for bars, restaurants, gyms and large venues.

Hannah Withers, owner of Maxine’s Tap Room on Block Avenue and Leverett Lounge on Leverett Avenue in Fayetteville, said the businesses will continue to follow health protocols. Withers said she plans to have a group discussion with her employees about specific measures to follow but intends to keep operations largely the same.

The businesses have limited inside capacity to allow for social distancing, with frequent cleaning and sanitizing and employees wearing masks and gloves. Withers said she believes keeping strict health protocols in place has served as a draw to customers, and she expected that trend to continue.

Withers’ businesses were among about 25 that joined a lawsuit last month against the state over its 11 p.m. curfew on selling alcohol. A judge dismissed the lawsuit, but the state lifted the curfew a few days later. Withers said she agreed with the directives on social distancing, masking, capacity and sanitizing, but at the time the added curfew restriction was too much to bear.

Now, Withers said she wants to wait until her staff gets vaccinated before considering lifting any self-imposed restrictions.

“As hard as they are to abide by them, and not being able to utilize our buildings to their full capacity, we are going to stay right where we are until our staff feels comfortable lifting any of our own personal rules,” she said.

About 25,750 residents in Benton and Washington counties were fully vaccinated against covid-19, while another 35,962 had received the first dose as of Thursday, according to the Arkansas Department of Health.

The two counties have a combined population of 384,234 residents 16 and older, so about 6.7% of that group have been fully vaccinated while about 9.3% are halfway there.

About 602,650 doses had been given in Arkansas as of Friday, according to the Health Department. The data includes first and second doses.

Aimee Morrell, spokeswoman for Northwest Health System, said the system anticipated completing a total of 19,000 doses, including first and second doses, by the end of the day Friday. Northwest Health planned to give 1,400 shots to anyone 65 or older at a mass vaccination event Friday at the Jones Center in Springdale.

School districts in the region began vaccinating employees about five weeks ago.

The Springdale School District has at least 1,963 employees who have received a vaccine, according to Trent Jones, spokesman for the district. The district had 1,425 employees fully vaccinated and another 150 employees who had received their first doses a week ago. Northwest Health System hosted an event at the Jones Center this week where it planned to give first doses to Springdale school staff and will give 388 second doses March 18 at the Jones Center, Jones said. Another 128 employees will receive their second doses March 3.

The district employs 2,952 people and doesn’t track how many employees may have received vaccines elsewhere.

A total of 992 Rogers Public Schools employees have received at least their first dose through the district’s mass vaccination events, according to Ashley Siwiec, spokeswoman for the district. Nearly 400 employees are fully vaccinated. The district has 2,063 employees and doesn’t track how many employees may have received vaccines elsewhere.

The Bentonville School District had 31 active cases as of Thursday, according to the Health Department. Rogers had 24 active cases, and Springdale had 25. Fayetteville had eight active cases. Active cases are those that have not recovered or died.

Covid-19 cases in Northwest Arkansas increased 750 in the past week, according to the Health Department.

Hospitals in Northwest Arkansas had a combined total of 34 patients in their covid-19 units as of Wednesday, two more than a week before, according to a joint statement from the region’s largest health care organizations via Martine Pollard, spokeswoman for Mercy Health System. The record for most hospitalizations in the region on a single day was 140 patients on Jan. 8.