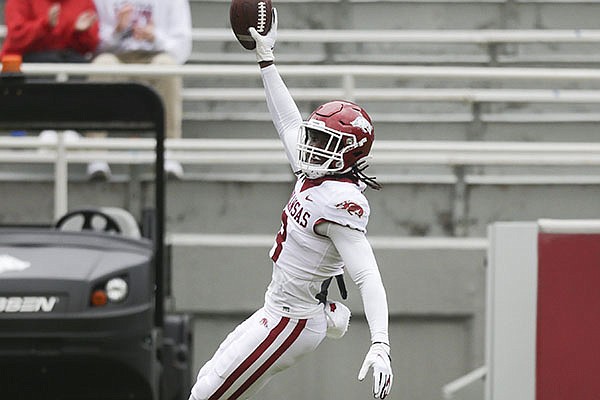 Woods, who played three seasons for the Razorbacks and had career highs in receiving yards and touchdown catches last season, made the announcement in a post to his Twitter account on Tuesday.

“Thank you to the University of Arkansas, my coaches, all of my teammates, and most certainly the state of Arkansas and the Razorback fans,” Woods wrote. “I love you all and I am very thankful for the love I have been shown over the past 3 years. You guys mean so much to me.

“With that being said, I am entering the transfer portal as a graduate transfer.”

Woods did not offer an explanation for his decision to transfer, which came three days after the Razorbacks concluded spring practice with the Red-White Game. Woods had two receptions for 40 yards during the scrimmage, including a 33-yard touchdown.

Arkansas coach Sam Pittman has not commented on Woods’ transfer.

On Monday afternoon, Woods followed up his announcement with another tweet.

“Want to make one thing clear,” he wrote. “Coach (Kenny) Guiton and the coaching staff were nothing but great to me. Showed nothing but love. Me and coach Guiton actually go back further than y’all think. He is my guy!

“Great coach, better man. So stop throwing hate his way. This was not personal.”

Woods was expected to be one of the Razorbacks’ top playmakers in 2021. He caught 32 passes for a career-high 619 yards and 5 touchdowns last season, and was a deep-ball favorite of quarterback Feleipe Franks.

Woods averaged 19.3 yards per reception in 2020, the highest mark among players with 10-plus receptions.

A 3-star receiver in the Razorbacks’ 2018 class who caught 41 touchdown passes at Magnolia (Texas) High School, Woods signed with Arkansas over scholarship offers from Washington State, Colorado State, Vanderbilt, SMU and other programs.

As a high school senior, Woods flipped his commitment from SMU to Arkansas within a week of when the Razorbacks hired SMU coach Chad Morris in December 2017.

Bears fall to 6/8 Razorbacks in extras