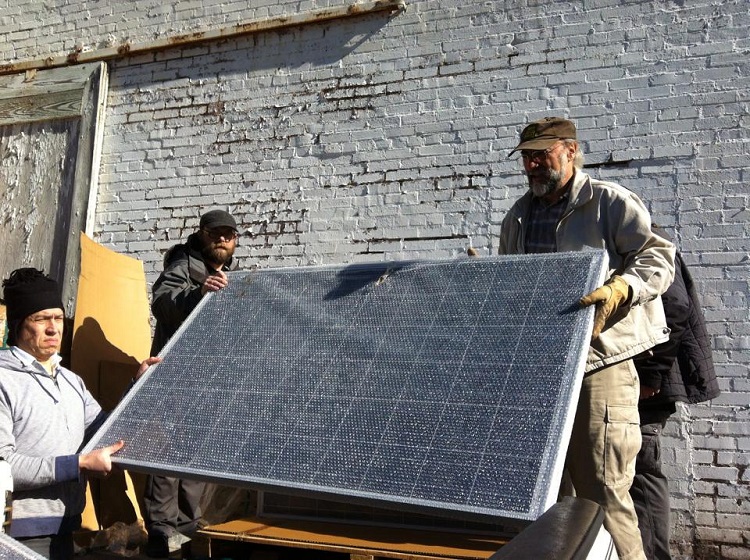 Arkansas – It’s not easy running a low-power FM operation. Raising funds to build the station, construction of studio and transmitter facilities, growing and training a volunteer staff, creating a format that serves your niche and of course, the endless need for fundraising all have to be mastered.

One misstep in any of these areas can cause the organization to flounder. In spite of all these challenges, KUHS(LP) in Hot Springs, Ark., appears to have hit one out of the park.

Its combination of out-of-the-box engineering solutions, enlightened management and innovative fundraising has created a cultural resource for central Arkansas that has been operating successfully since 2015.

KUHS also holds the distinction of being the only solar-powered station in the state.

Powered by the sun …

The station story began when Zac Smith, a tuba player and amateur radio operator then living in Winston-Salem, N.C., read about the FCC’s plans to allocate part of the spectrum to LPFM.

“I thought, ‘How cool would it be if there were a deejay booth in a coffee shop and you could drop a tune, or talk about your latest philosophical revelations?’”

That thought led to Smith partnering with broadcast engineer Bob Nagy and Bill Solleder, founder of Hot Springs non-profit Low Key Arts. Their 2013 application was approved by the commission, and they spent the next 18 months raising $35,000 and preparing for sign-on.

The first step was finding a transmitter site. Smith and Nagy scouted the peak of nearby West Mountain, which was covered with cellular, radio and emergency service towers. They found a long-vacant AT&T microwave relay building that was available.

The power had been disconnected, and the two quickly did the math to calculate their LPFM’s power needs. They determined that a solar installation would be more cost-effective than restoring commercial power, and estimated a two-year payback period. The system cost $2.75/watt including batteries. Since the installation work was all volunteer, there were no labor costs.

Nagy designed a 2.4 kW solar system for the site, and took steps to keep as much of the equipment running directly off DC as possible, avoiding power-hungry DC-to-AC inverters.

The station purchased a Bext exciter that ran on 24 VDC. Nagy designed a system to convert the solar system’s native 12.8 VDC to +5VDC and other voltages for ancillary equipment.

Initially, the KUHS solar system used lead-acid batteries for power storage, which Smith admits was probably not the best choice.

“They were the least expensive option, but they turned out to be very high maintenance. Corrosion of the battery terminals was an ongoing issue, and the cells had to be kept topped off with deionized water.  Even worse was the damage to our other equipment from the corrosive gasses they released.”

When it came time to replace these, the station used 200 Ah sealed lead acid batteries — more expensive but virtually maintenance-free. The battery system has enough juice to power the transmitter site through a cloudy winter week.

In 2016, KUHS also installed a 6 kW solar array on the roof of the Hot Springs studio. It powers the lights, studio equipment and a portion of the HVAC. The system has a grid tie, so excess power is sold back to the power company. For that installation, they paid $2.15/watt. There was a lot of volunteer labor in the project, but the switchgear was installed by a licensed electrician.

To get programming from the downtown Hot Springs studios to West Mountain a mile and a half away, they selected a Cambium Networks 5 GHz WiFi system with PoE (Power over Ethernet). A pair of Barix boxes provided the A-D and D-A conversions.

KUHS took steps to upgrade in 2018. The frequency was changed from 97.9 to 102.5 MHz to reduce interference from other stations. A Pira P132 RDS encoder was purchased to add text to the signal, and a BW V2 30W TX exciter was purchased for better sound and remote management. The frequency swap was celebrated with a gala event at the local theatre.

The station runs with a staff of 60 to 65 DJs. One of the key factors for its success is that everyone at the station, including Smith and Nagy, is a volunteer. Smith said the idea came from Nagy.

“He was really adamant about that. He said that at every volunteer station he had been at, the moment you raise enough money to get one person on part time, everybody quits putting in the effort. They’re like, ‘Well, let the paid person do it.’’’ He adds that part of the KUHS culture involves urging volunteers to ask for help when they need it, but also emphasizing that no one is going to do your work for you.

Smith’s real job is brewmaster for the SQZBX Brewery and Pizza Joint, which is in the same building as KUHS. The two businesses sometimes fertilize each other, with visitors to the station patronizing the brewery, and brewery customers discovering KUHS.

The programming philosophy for KUHS is providing community access and airing eclectic genres of music that are neglected by mainstream media. Smith uses a community garden analogy to describe the programming.

“We’re not maximizing our slice of the radio spectrum for money, rather we’re maximizing it for access.” Volunteer DJs have a love for a particular type of music that they think is underrepresented on the airwaves of Hot Springs. Each one stakes out a 1-2-hour shift to bring their musical passion to the community.

Unusual for 21st century century radio, the KUHS studios have turntables, and several of the volunteers build their shows around various genres of esoteric vinyl.

Most vinyl DJs bring their own material. The station has a small library of around 200 LPs, 50 singles and approximately 200 CDs. Most were donated when the station started.

“With the internet what it is in terms of a musical resource,” Smith said, “I decided early on that being an archivist was not going to be our strong point. With 60 or 70 DJs, what would you collect with limited space?”

Holding down a full-time job while managing KUHS requires some thoughtful time management. One trick Smith utilizes is automation.

“One of our board members is a programmer, and he has been able to automate a lot of small tasks I need to do and glue them together with Python.”

KUHS is a member of the Grassroots Radio Coalition, an offshoot of public radio that focuses on community access and volunteer involvement in station operations. In 2016, the station hosted the annual Grassroots Radio Conference.

The annual budget for KUHS is about $12,000. That relatively small number is possible due to the combination of an all-volunteer staff and regular contributions from a stable financial base that includes several large benefactors, major contributors and numerous Hot Springs merchants. Additional revenue comes from music festivals. All of this makes Smith very grateful, “No one really wants the job of going door to door asking for money.”