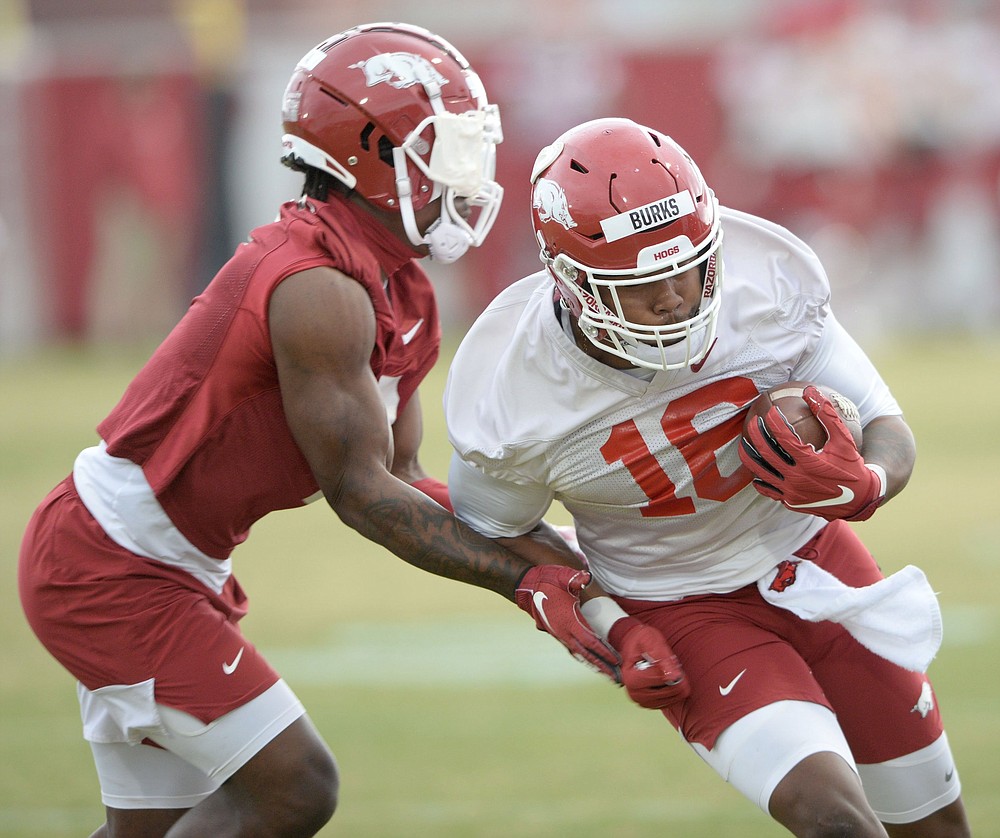 FAYETTEVILLE, Ark. — University of Arkansas receiver Trey Knox made a seldom-heard admission by a football player this week.

Knox, a 6-5, 210-pound junior from Murfreesboro, Tenn., said he suffered through a crisis of confidence last season.

“This spring I’ve just focused on getting my confidence back because I feel like that was also a problem with me,” he said. “I just lost confidence in myself. I do have it back. The goal is not to lose it ever again.”

The statistics were startling for a well-regarded wideout who had played through an early hip injury to post solid freshman numbers for a low-powered offense in 2019.

Knox caught seven passes for 70 yards and did not score a touchdown in the Razorbacks’ SEC-only 10-game schedule. The year before, he was fourth on the team with both 28 catches for 385 yards and scored 3 touchdowns.

However, the lack of spring drills, the disjointed lead-up to the 2020 season and a frustrating illness all conspired to knock Knox back last fall.

“Last season didn’t go the way I wanted it to, obviously,” Knox said. “Honestly I hold myself to a higher standard. My freshman year was a good year, but we’re just trying to expound upon that, be better. I’d like to try to meet those expectations because I know I can. I’m going to push myself every day to do it.”

Knox reluctantly shared what he thinks led to his sophomore slump.

“I don’t want to make excuses because that’s not the kind of guy I am, but I think just not having a spring really hurt me because I’m the kind of guy that, I need repetition, repetition,” he said. “Because I want to know exactly what I’m doing play in and play out.

“I think not having that spring and then being not 100% at the beginning of fall camp really put me at a step behind everyone else, and I think I just didn’t get off on the right foot with the coaching staff and not playing fast and going out there and thinking. Those are the things that I think really held me back last year.”

Knox was asked what prevented him from being 100% to start fall camp.

“I was just sick,” he said. “I don’t know. Just throwing up and losing weight. I lost 10 pounds before fall camp started and was just not feeling myself.”

Knox is trying to put on a little weight yet also add quickness. On several occasions last year, Coach Sam Pittman said Knox had to get better separation from defensive backs.

After Knox didn’t come down with a high two-point conversion pass in a game at Auburn in Week 3, he went four consecutive games without a catch, then grabbed one pass in each of the last three games.

Meanwhile, Treylon Burks and Mike Woods emerged as quarterback Feleipe Franks’ go-to targets. Burks, who didn’t score as a freshman in 2019, led the team with 51 receptions for 820 yards and 7 touchdowns in 9 games. Woods had 32 catches for 619 yards and 5 touchdowns, and he led the team with 19.3 yards per catch.

Slot receiver De’Vion Warren, who is rehabbing from knee surgery in advance of his bonus senior season, had 15 catches for 278 yards and 3 touchdowns in 7 games.

“Trey, he’s looking good,” Woods said. “Everybody knows that he didn’t have his best year last year, but I think he came in with a great mindset, and he’s been attacking it every day, so I think he’ll surprise a lot of people.”

Knox’s statistical drop and lack of targets last season are the perfect recipe for a player to enter the transfer portal these days.

The outgoing and engaging junior said transferring entered his mind but not to the point that he acted.

“That goes through a lot of people’s minds,” he said. “It obviously did, but I love it here in Fayetteville. I love the staff. I love my teammates.

“I really care about how my teammates view me and I love it here, so I want to be here, I want to help this program go back to the top, be at the top. I feel like it’s best to just stick it out.”

Burks and Knox are the only remaining players from a highly touted class of wideouts in 2019, as T.Q. Jackson and Shamar Nash transferred out after each of the past two years, respectively, before making a catch for the Razorbacks.

He also talked to Burks about going in a different direction from Knox with his weight goals heading into 2021.

“When Coach Guiton got here, we had talked about my weight,” Burks said. “He said he wanted me at least down to like 225. I weighed in the other day and I was at 223, so I’m getting back down there.

“I feel like my body had changed tremendously, and I thank my teammates for pushing me every day to get to where I am right now.”

Burks said he’s also trying to get faster, and toning up his body works toward that purpose.

“Just prepping myself just to be a better player than I was last year and correcting the small things that will make me great,” he said.

Woods is working on expanding his value, even taking reps in the slot position after working exclusively outside the last couple of seasons.

“I’m just looking for different ways I can impact the team and provide service to the team,” Woods said. “Different ways to help us out, so it’s been going good.”

The Razorbacks restocked at the wideout spots in various ways. Jaquayln Crawford sat out last season after transferring from Oklahoma and could provide the top-shelf speed to stretch defenses.

Early enrollees Ketron Jackson and Jaedon Wilson, two of the top-rated signees in the latest class, are on campus and working to absorb offensive coordinator Kendal Briles’ playbook. Jackson, rated the No. 21 receiver in the nation by 247 Sports, has run a 4.4 40-yard dash. Jackson, offered by national powers such as Alabama, LSU, Ohio State and others, is rehabbing from a knee injury.

Signee Bryce Stephens, a 6-footer from Oklahoma City, is scheduled to arrive in the summer.