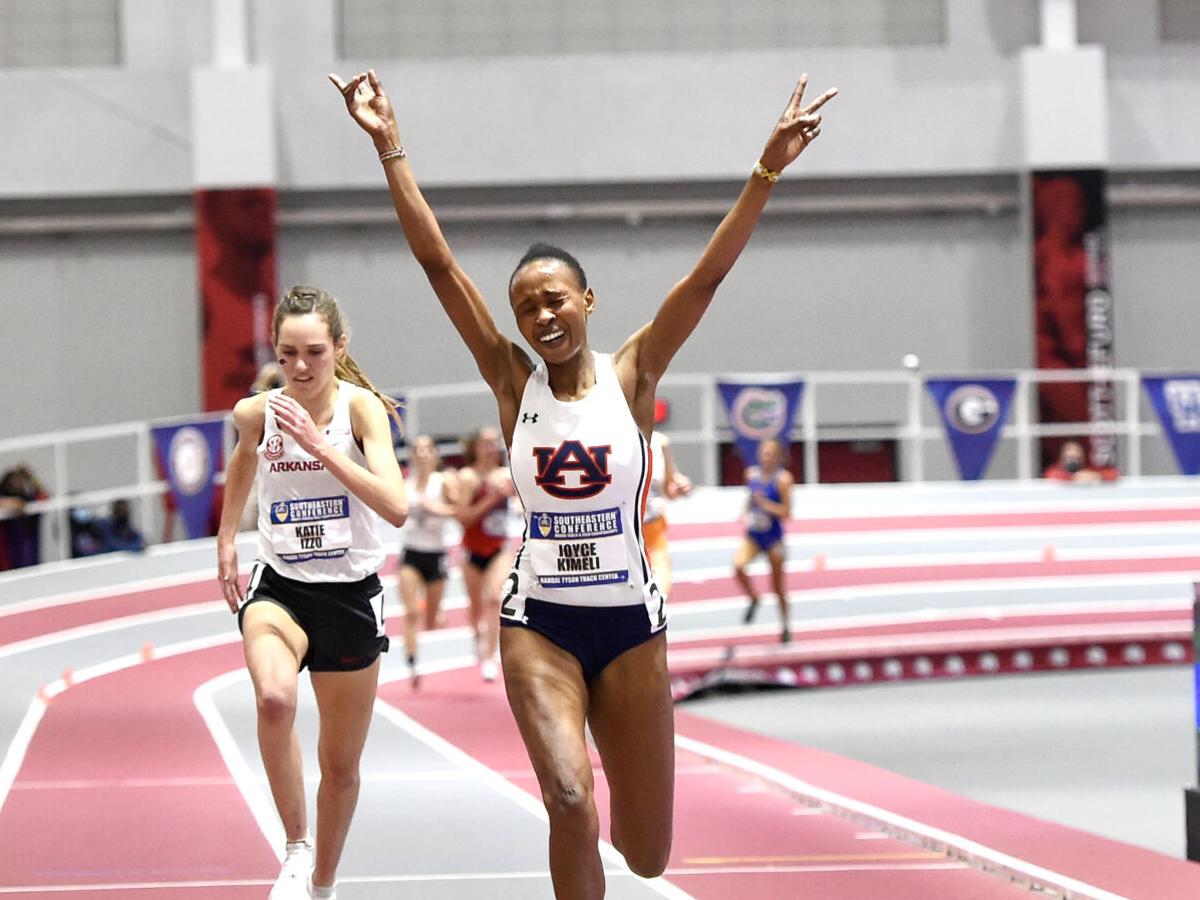 FAYETTEVILLE, Ark.—Auburn junior Joyce Kimeli etched her name in Auburn history Saturday as she won the women’s 3000 meter run to claim her second SEC victory in as many days at the Southeastern Conference Indoor Championships at the Randal Tyson Track Center at the University of Arkansas. The Eldoret, Kenya native won the 5000 meters on Friday to become the first runner in Auburn history to sweep the distance events at SEC Indoors.

Kimeli outkicked Arkansas’ Katie Izzo for the second consecutive race in the last 100 meters to win in a school-record and SEC Indoor meet record time of 8:56.02. She became the first Auburn athlete to win two SEC individual titles in the same year since Kerron Stewart in 2007.

The win was the second by an Auburn Tiger on Saturday. Junior transfer Dante Brown claimed gold in the men’s 60 meters, while teammate Christopher Grant won silver en route to leading the Tiger men to their highest point total at the meet in nine years.

Brown crossed in 6.66 to become Auburn’s first SEC Champion at 60 meters since Marcus Rowland in 2010. Grant, who was the bronze medalist last year, crossed the finish line in 6.71. It marked Auburn’s first 1-2 finishers in the event since 1977 when Harvey Glance and Tony Easley took first and second in the 60-yard dash. It was a great showing by Brown and Grant, who entered the meet ranked third and eighth in the league.

Junior pole vaulter James Courson posted a lifetime best 5.43m/17-9.25 to win silver and move into the nation’s top 10 to punch his ticket to the NCAA Championships in two weeks. The Hoover, Ala., native, who’s previous best was 5.26m, cleared three bars above that, with clean passes at 5.33m, 5.38m before making 5.43m on his second attempt. The 5.43m is the third best mark in school history and highest clearance since Clark Humphreys cleared 5.50m/18-0.5 to win the 1997 SEC Indoor meet.

Saturday evening, junior Presley Weems ran a lifetime best 4:40.97 to finish sixth in the women’s mile. The Hoover, Ala., native shaved a second and a half off her previous best ran in Friday’s semifinals. Weems improves to Auburn’s No. 3 performer in school history and her two miles ran at SECs were the second and third fastest miles by a Tiger since 1998.

Sophomore Joceylnn Budwig became a two-time SEC scorer in the shot put replicating her eighth-place finish from 2020 with a best mark of 15.64m/51-3.75.

It was a successful meet as the Tiger won two SEC individual titles were claimed. Besides Brown in the 60 meters, Kimeli claimed the women’s 5000m in a meet record time of 15:46.88 on Friday night.

The victory not only gave the Kenyan her first SEC gold medal, but she became Auburn’s first conference champion indoors since 2012 and the first to win at 5000m since Lindsey Rogers 23 years ago in 1998.

Other medalist performances included Dontavious Hill’s silver in the men’s high jump and bronze medals by Alex Spyridonidis in the men’s heptathlon and Madi Malone in the women’s weight throw.

The Auburn men finished eighth with 45 points, the most by the Tigers at SEC Indoors since 2012. The Tiger women were 10th in the team standings with 30.5.

The NCAA Championships will take place in two weeks at the Randal Tyson Track Complex in Faytteville.