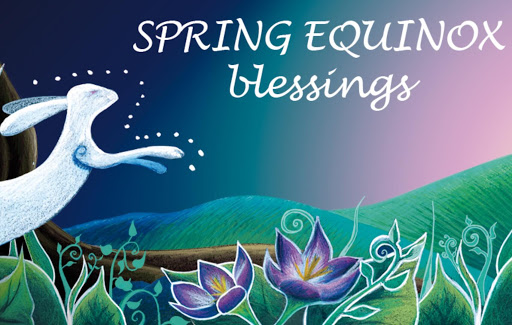 FAYETTEVILLE, Ark. – The goddess Ostara — sometimes called Eostre — is the Anglo-Saxon goddess of spring, resurrection, rebirth and the maiden aspect of the Three-Fold Goddess (maiden, mother and crone), explains the Journeying To The Goddess website.

“She gave her name to the Christian festival of Easter — which is an older pagan festival appropriated by the church — whose timing is still dictated by the moon,” writes the blogger, RayvnStar. “Modern pagans celebrate her festival on the vernal Equinox, usually around March 21, the first day of spring.”

A collaborative ritual celebrating Ostara, the spring equinox and “the balance of light and darkness in nature and within ourselves” is the centerpiece of this year’s Goddess Festival, set for March 20-21 in Fayetteville. In its 12th year, the festival will go online in 2021 — not the grand vision its organizers had but a safer one.

“We had such huge plans — an elaborate ritual at Mount Sequoyah — then we realized we are nowhere near finished with this virus,” says Gladys Tiffany of the Omni Center, the host organization. “A couple of months ago, we said, ‘Well, we can’t do it in person. How do we go about doing it online?'”

The solution, she says, relied on the expertise of the planners, which is as varied as the paths that brought them to the goddess. John Treat, who teaches humanities and religious studies at the University of Arkansas, brought a practical understanding of Zoom and a unique faith background.

“I grew up in Arkansas and went to Lyon College in Batesville,” he explains. “I moved to Boston and did a Master of Divinity at Harvard Divinity School, focusing on religion and public policy. I spent about 15 years working in human rights and international development for a large [nonprofit].”

Then, he adds, at the age of 38, “I decided it was time to try something radically different, and I moved to a 600-acre Cistercian monastery in southwest Wisconsin, where I spent three years as a member of the community taking care of the horses, vegetable garden and bakery. It was not my calling, but I learned a great deal about the contemplative life and about myself.”

“The divine encompasses all parts of our experiences,” he says. “So to recover the parts of the feminine we have lost, we must be open to older understandings of the divine that were more inclusive.”

Tiffany says this year, the organizing committee of the Goddess Festival spent time reading and discussing their own faith journeys, “and it really helped clarify how we see ourselves.” She identifies as both a worshiper of the Divine Feminine — “there is so much need for the Divine Feminine in our hypermasculine culture” — and as a “universalist Quaker.”

Members of the Society of Friends, founded in England in the 1650s, “believe that there is something of God in everybody and that each human being is of unique worth; seek religious truth in inner experience, and place great reliance on conscience as the basis of morality; and emphasize direct experience of God rather than ritual and ceremony,” according to a BBC page on religions. Because “it is up to me to decide how I relate to God,” says Tiffany, there’s room for both the Quaker faith and the search for the Divine Feminine.

“I started to work with that desire for a connection to the female side of God,” she says, “and I realized how much baggage I carried from the old male God. I wanted to figure out how to make my image of God as a feminine aspect feel as real as the male aspect. It’s just been the last four or five years I’ve really started to feel a connection to her. This study this year and talking to other people all helped me to solidify that.”

It’s Holly Attaway who, along with Catherine Williams, Talina Madonna and Regina Elizabeth, created the Ostara ritual, and she says it reflects her role as an “earth-centered religion practitioner.”

“I grew up Catholic,” she says, “but somewhere in there, it all started to feel really empty to me. I had a lot of dogma but not a lot of spirituality. I wasn’t able to connect to the mystical aspects of Catholicism.”

Connection is at the heart of the ritual planned for the Goddess Festival, which will ask people to create their own sacred space at home, light a candle and bless a seed or a portion of the earth to embrace the magic of spring.

“I want people to have physical things happening that keep them in the space, so we’re all in circle together and can feel each other’s presence over the screen,” Attaway says. “It’s an opportunity to connect to each other energetically even though we can’t be together in person.”

The $15 registration fee for the festival includes not only the Ostara ritual but workshop sessions on Wicca as resistance, Ozark witchcraft, energy work, creating your own oracle cards, medical cannabis, candle magic and goddess spirituality. As in past years, the festival will feature a concert on Friday night, this time with sets from Ginger Doss and Lynda Millard, S. J. Tucker, and Renée Janski, via a separate ticket through OnlineConcertThing.com.

“(Festival) founders Diana Rivers and Vick Kelly wanted to create a space to discover and celebrate the Goddess in Her many forms and guises, including the Goddess within each of us” says Tiffany. “As a planning circle, we realized that people need ways to come together to imagine and work for a better world more than ever, [and] we believe that a celebration of the Divine Feminine is the ideal place for the renewal we all need right now.”