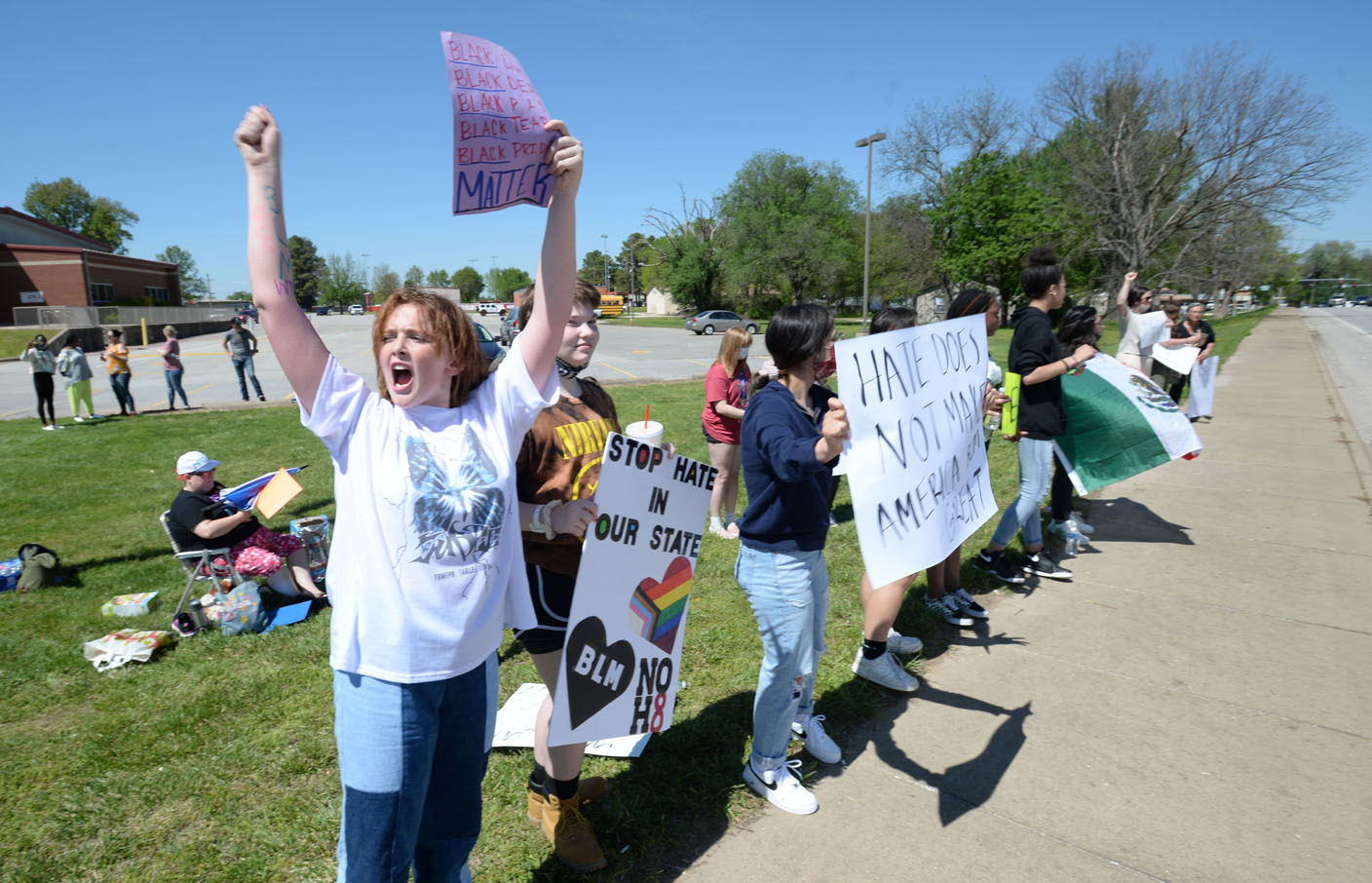 FARMINGTON, Ark.  — Parents and students gathered Friday afternoon at Farmington Junior High School to protest what they say was a racially motivated assault on a student.

Jennifer Smith said her 12-year-old son, Corbin Smith, was attacked by other students at the school Tuesday. Smith said the attack began with one boy confronting her son and others joined in. Corbin is biracial.

“It started out verbally,” Smith said. “This is what my son told me the other boy said to him, ‘You need to go back to picking cotton in the cotton fields.'”

Her son said the boy threw him to the ground and was on top of him when four other boys began kicking him and piling on, Smith said. Smith said her son told her he started screaming he couldn’t breathe and other students stopped the attack.

The School District dismissed classes at 1:30 p.m. after district administrators heard of the planned protest, which took place at the junior high school about 3 p.m.

Superintendent Jon Laffoon didn’t return a message seeking comment Friday. The district released a statement Thursday, saying officials are aware of an incident reported on one of the district’s campuses Tuesday, but they couldn’t comment on any specific situation because of student privacy laws and policies that protect the confidentiality of all involved.

“Farmington School District is not immune to the social issues currently affecting our nation,” the statement continued. “We will always strive to be part of the solution. Anytime improper conduct is reported, or we learn of it, the district takes immediate steps consistent with our policies to thoroughly investigate the incident and address it through disciplinary procedures and extended services. The district has taken appropriate action to investigate the situation and assure the safety of students. When it is appropriate, we also report such matters to the authorities. Any unjust treatment of people especially on the grounds of race, age, sex, or disability is unacceptable. We are committed to student safety. The safety and success of our students and staff is our top priority.”

“We’re investigating it with the school. At this time, the victim has declined to press charges,” Parrish said.

Parrish said he couldn’t release details of what happened because minors were involved. A resource officer at the school Friday afternoon said there had been no trouble related to the protest. Several Farmington police vehicles were at the campus Friday afternoon.

Friday’s protest followed one Thursday at the junior high involving about 30 students, spurred by the same incident. According to Principal Joe McClung, the protest on Thursday started in the school’s commons area between first and second periods. Students then gathered outside between second and third periods. By 1 p.m., most students returned to class, McClung said. Some students were picked up by parents, he said.

“The first thing he said was, ‘I wish I could have been there to help,'” Young said of her conversation with her son. “Then he said, ‘What if I’m next?’ That’s why I’m here.”

Young said there have been some bullying issues in Farmington schools in the past, but none she knows of with this kind of racial element.

Smith said she has had some conversations with school officials since Tuesday and has been assured the school is treating the incident seriously and is going to take steps to prevent future incidents. She said she doesn’t want any of the boys involved to be harmed in any way, but the issue has to be addressed through policy changes and appropriate disciplinary action.

“Those boys don’t need any harm to come to them, they need help,” Smith said. “But there needs to be consequences.”

Prairie Creek to close after 50 years in Rountree family