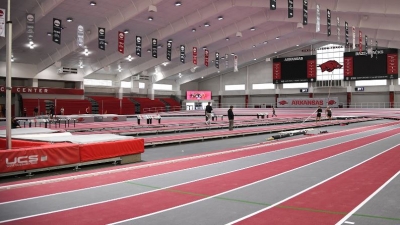 It will mark the first indoor track and field competition for Arkansas since winning the SEC Indoor championship last February, a span of 322 days.

“It’s a baby step for us,” said Razorback men’s head coach Chris Bucknam, in his 13th season at Arkansas. “We have been training in the fall, trying to have a normal fall training period for our non-distance runners.

“More than ever, it’s a priority for us to get through the first meet without any injuries. It’s an even greater significance now, since these kids haven’t competed since the SEC Indoor Championships last February.”

Action inside a renovated Randal Tyson Track Center begins at 11:30 a.m. with field events while running events start at 1 p.m. The meet will conclude at 6:45 p.m.

There are new variables for the coaching staff and athletes to navigate as protocols for the corona virus take precedence this season.

“We just want to get through the meet, see how the meet runs since we have all new procedures and everything,” noted Bucknam. “That goes from the warm-up to the atmosphere in the building. It’s going to be all different.

“We just want to see our guys out there competing and get the taste of competition so we can try to get into a routine. The strange routine that we will be in starts on Saturday and goes all the way through the NCAA meet. We want to try to cement that routine in and this is the start of that process.”

The opening meet will have quite a few new faces representing the Razorbacks in various events as they mix in with a very talented returning group.

“We’re taking it slow and steady with the group who competed in cross country, since their last meet was at the end of October,” said Bucknam. “We will slowly implement them into races the following week. You will see some younger kids compete this weekend. There are some athletes we are developing that need to race and we’ll get them in there.”

Lining up in the 1,000m to open the season for Arkansas are Amon Kemboi, Andrew Kibet and Gilbert Boit. The 3,000m race will also include a group of Razorbacks who competed during the cross country season in the fall, led by Matt Young and Ryan Murphy.

Kris Hari and Tre’Bein Gilbert, who each have marks among the Arkansas all-time top 10 in the 60 and 60m hurdles, respectively, will race at 200m among a crew of teammates. Three multi-event athletes – Markus Ballengee, Etamar Bhastekar and Daniel Spejcher – will contest the 60m hurdles, pole vault and shot put.

Upgrades inside Randal Tyson Track Center, which will host the SEC and NCAA Championships this season, include a new Mondo surface, a second videoboard, new banners displaying the multiple national championships and triple crown achievements of the program, along with new graphics in the facility.

However, one key element will be missing this weekend and for the indoor season – Razorback fans. There is no equal among indoor track and field venues to the energy Hogs fans create during every home meet.

Fans have an opportunity to cheer on the Razorbacks by submitting a video of themselves Calling the Hogs or by posting a message to the team.