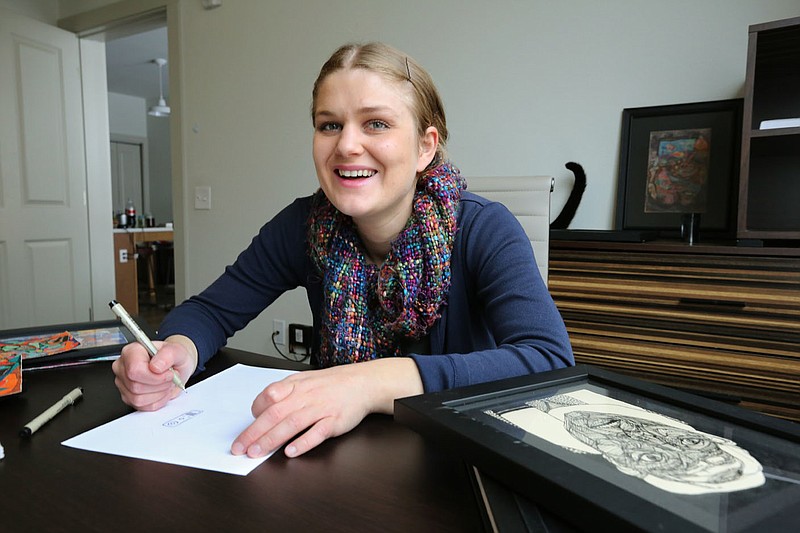 “I do think there is a need across the state,” said Kathy Liao, Artist Inc. program specialist with Mid-America Arts Alliance. “It really is coming back to the idea of community building and letting artists realize they do have resources, they have a network out there they can tap into.”

The three-day online express program is a condensed version of Artist Inc. Live, an eight-week program addressing topics such as marketing, good business practices and financial management for working artists of all disciplines, McClea said.

Three additional iterations of Artist Inc. Express will be offered in central, northeast and south Arkansas in the upcoming months, according to the alliance’s website. Priority registration for the western Arkansas workshop ends Feb. 28.

Twenty artists will be able to participate in each Artist Inc. Express workshop, McClea said.

“Now that we are all home-bound, it’s being offered via Zoom,” she said.

Hannah Jeremiah, 26, of Fayetteville said she’ll be participating in the workshop to learn more about developing business skills.

“That’s something I’ve never had any formal education in,” she said.

Jeremiah has been a working visual artist for about five years and draws with felt tip pens on paper, she said. Her works are typically about 5 inches by 7 inches and run from $10 prints to $150 framed pieces.

Jeremiah said she discusses topics not easily put into words, with titles such as “Talking to the Universe” and “Witness to Nourishment.”

Jeremiah said the biggest challenge she’d like to address through the workshop is how to coordinate more public viewings of her work.

“I feel like I’m the kind of artist who wants to make art all the time and would be happy to give that part of the process over to a gallery,” she said.

Participation in the program normally costs $200 but is being offered for free through the Arkansas Arts Council, McClea said.

Each three-day workshop costs $5,000 to conduct and is paid in part by grants provided through the Mid-America Arts Alliance, she said.

Offering the workshops for free may benefit working artists during the pandemic, McClea said.

“Maybe they have lost income, maybe they have not been able to participate in performances or in exhibitions, so they’re reflecting on what they can do to improve their practices right now while they’re isolating at home,” she said.

Jeremiah said she was most affected by the cancellation of holiday art and craft shows but has used the downtime to focus on creating new pieces.

“This is a way for us to try to help rebuild some skills and some confidence — help artists retool in what has become a very challenging economic situation for our creative economy,” Ralston said.

“When you have so many people who are working and driving an income and contributing to their local economy, you want them to have the skills and sophistication to practice,” he said. “The long-term goal is to build that sector of the economy and to encourage that creativity.”